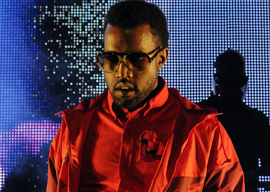 There’s a trope in drama where the hero and the villain realize they have more in common than one would initially think. This is epitomized by the line “We’re not so different, you and me.” Hip-hop artist Kanye West and President Trump have recently exchanged nods and more or less had this conversation. But should it have taken this long to notice the similarities between Trump’s personality and someone from the world of hip-hop? Were they ever at odds? On closer examination, the differences dissolve.

When Kanye released his debut album in early 2004, nerds were at their peak in popular culture, with Seth Cohen, Peter Parker, Rivers Cuomo, and Mark Zuckerberg as the nerd heroes of the hour. Millennials found in Kanye a braces-wearing rapper who watched anime—their nerd in hip-hop. Kanye’s “George W. Bush does not care about black people” follows in 2005, then the Taylor Swift Interruption in 2009, with the latter incident getting him called a “jackass” by President Obama (possibly the root of Kanye’s contrarian public politics). Like with Trump allegedly deciding to run for president again after being insulted by Obama at the White House Correspondents Dinner in 2011, Kanye’s animosity all hinges on an offhanded joke Obama made. A marriage to Kim Kardashian of the Kardashians, a woman and a family who have repeatedly immersed themselves and profited off of the scandals of black male entertainers and athletes (going back to her father representing O.J. Simpson at his murder trial and continuing to Khloe Kardashian’s NBA husband, Tristan Thompson, last month), is the last of the big three Kanye Controversies leading up to this.

“In a way what Trump has always done, and what he now does on Twitter, is a literary form of hip-hop.”

As for Kanye’s embrace of Trump? Two things: Always assume that a celebrity, or really any person who has been on national television more than twice in their lifetime, is more motivated by a desire for fame and fortune than anything else. Kanye has an album coming out soon, and this is likely just a PR blitz via controversy. An entertainer proclaiming a love for Trump in 2018 is like David Bowie saying he’s bisexual in 1970. (And that analogy can be extended further: Homosexuals and Republicans in Hollywood are used to being closeted.)

But assuming he’s serious, here’s something to keep in mind: There has not been a true reconciliation between hip-hop’s current, at least public, distaste for Trump and the decades of love and admiration it had for him. Kanye said, “Trump has been one of rap’s favorite people,” and this is backed up by history. Trump has been name-dropped in dozens, if not hundreds, of rap songs.

Trump’s self-aggrandizing way of talking about himself has its roots in New Thought, and it’s a type of magic thinking: Your words, thoughts, and beliefs are tools and powers unto themselves that can change reality. Trump, like hundreds of rappers (including the latest hitmaker Post Malone) and millions of Americans, believes in speaking things into existence. As the mystic scholar Manly P. Hall, who was read by Ronald Reagan, wrote: “Though the demonism of the Middle Ages seems to have disappeared, there is abundant evidence that in many forms of modern thought—especially the so-called “prosperity” psychology, “willpower-building” metaphysics, and systems of “high-pressure” salesmanship—black magic has merely passed through a metamorphosis, and although its name be changed its nature remains the same.”

In a way what Trump has always done, and what he now does on Twitter, is a literary form of hip-hop: a monodrama where a wealthy aggressive man tells you, the listener, that he is The Best At Being the Greatest, that he’s a star who can have all the women he wants, with these dictatorial monologues only interrupted when he gets into a feud. This is hip-hop to a T: Trump is America’s first hip-hop president.