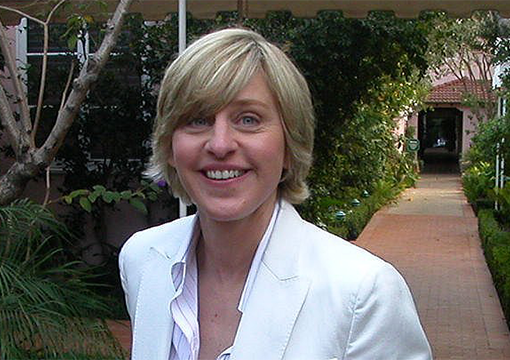 Ellen DeGeneres was born with this face, and that’s the plain truth. If you think there’s any more nuanced or complicated reason beyond that for why she “became” a lesbian, I strongly beg to differ.

She was “born that way” only in the sense that she was born with a bird’s face rather than a female human’s, which predetermined her to be physically unappealing to human males throughout her mating years, leaving disgruntled and maladjusted women as her only sexual option. She is therefore a lesbian not by choice, but by necessity. According to a sob story she repeatedly tells, her stepfather found her attractive enough to molest in her mid-teens, but beyond that, I find little evidence or reason to think she ever had much of a problem rebuffing male advances, because I doubt there were many such advances, if any.

As unfunny as she is homely, Ellen also enjoys a level of fame that is so wildly out of proportion to any discernible talent, it is highly suspicious. She has won 20 People’s Choice awards—more than anyone else. In 2019 she raked in over $80 million, making her the world’s highest-paid comedian. She hangs out with presidents and ex-presidents and, despite a gaping lack of any notable film appearances, she has hosted the Oscars twice. She even has more Twitter followers than Donald Trump does.

No one has ever been rewarded so richly for their lesbianism as Ellen. Since this canary-faced Sapphite’s only skill lies in “being a lesbian,” my suspicion is that she became the world’s preeminent Lesbo Mogul because she was hand-picked to play a role, just like the similarly untalented billionaire Oprah Winfrey. Whereas Winfrey’s role was to soften up the fat white female man-haters who watch daytime TV to the point where they eagerly embrace shameless black identity politics, Ellen’s role was to make lesbians appear “relatable” and “normal” and even “kind.”

“Hell hath no fury like a woman scorned by every man on Earth except her pervert stepdad.”

Since I’ve done my best to ignore her, I was unaware that Ellen—who, like Oprah, is so famous that you don’t even need a last name to know who I’m talking about—ends every one of her shows with the admonition to “be kind.” She even sells merchandise—including anti-coronavirus face masks—with this insipid phrase on it. Her entire public persona—beyond the aggressive muff-diving—is based on public displays of kindness and public displays of charity.

Despite her lesbianism—scratch that, primarily because of it so long as it’s tethered to an endlessly loud shtick of kindness and generosity and “relatability”—Americans have eagerly embraced Ellen during her lifelong string of bad haircuts. Just like Oprah, she’s provided listless and unemployed American females with all sorts of reasons to feel great about who they are and to feel seething contempt for all things straight and white and male.

Predictably, people are now acting shocked to learn that by many accounts, Ellen is neither kind nor generous. Forgive me for crowing, but I could have told you this. No one who makes that much of a point of being kind is actually kind, or they wouldn’t feel the nagging urge to keep making such a point about it. Same thing goes for anyone who makes such a grand public display of being charitable.

In March on Twitter, an alleged comedian and confirmed “podcast host” named Kevin T. Porter mentioned Ellen’s “kindness” shtick and how it clashed with ubiquitous Hollywood rumors that she’s “notoriously one of the meanest people alive.” An “Ellen is a Cunt megathread” emerged on Reddit in response to Porter’s tweet that included this nugget:

She’s well known in the TV production world as the most horrible human alive. Literally anyone who works in talk shows either has had a direct run-in with her or knows people that have. It’s not even a secret. She’s really really awful….

There were hundreds of responses to Porter’s request to share stories about Ellen’s alleged cuntiness—the majority being second- and third-hand accounts—but when there’s that much smoke, one tends to suspect that there’s at least a little bit of fire behind it. For example, I’ve never seen anyone call Betty White a cunt.

One of the major themes that kept emerging was the allegation that she forbids everyone on her staff from even making eye contact with her, under threat of termination or at least a thorough public tongue-lashing. She also seems to get a sadistic kick out of scaring her own employees.

She has no qualms about publicly humiliating audience members who dared to take more than one piece of the “free” swag her show offers.

She puts the shrieking obese flyover-country hetero hausfraus who adore her through such humiliating motions for cash and prizes, it reminds me of SCTV’s classic fake game show Wacky World of Poverty. And now she hosts a regular game show where she sadistically cackles while contestants clumsily plod through one potentially injurious athletic feat after the next.

Others told of her publicly humiliating someone who gave her a bad haircut—even criticizing the poor girl’s looks, which takes tremendous moxie when you look like Ellen—and trying to get a waitress fired for the crime of having chipped nail polish.

There are also multiple accounts of her either publicly screaming at her wife Portia or embarrassing her by acting tyrannically toward random pissants.

Naturally, none of this is good PR for the lesbian community.

And now comes news that the Queen of Kindness has used scab labor to avoid paying her regular crew to stream her show during the COVID-19 crisis. Of her core stage crew of 30+ employees—some of whom have been with her during the show’s 17-year run—only four have been retained to help her film the show at home. The rest have been hired from elsewhere. The regulars have also been informed that they’re receiving a 60% pay cut while Ellen whines thusly from her $27-million mansion:

Being in quarantine is like being in jail. It’s mostly because I’ve been wearing the same clothes for ten days and everyone here is gay.

Maybe she is still plagued with guilt that her first love died in a car crash immediately after arguing with Ellen.

Maybe she’s still furious that her parents initially rejected her when she came out of the closet.

Maybe she’s still bitter that her stepdad molested her. Or maybe she’s even more bitter that more men didn’t try. Like they say, if there’s one thing women hate more than unwanted attention, it’s not getting the attention they want.

Anyone who has spent any time with lesbians, whether in laboratory settings or in their natural element as they cavort unbathed in the wild, knows they are fundamentally nasty creatures. Of COURSE Ellen is mean. She’s a lesbian. Hell hath no fury like a woman scorned by every man on Earth except her pervert stepdad.