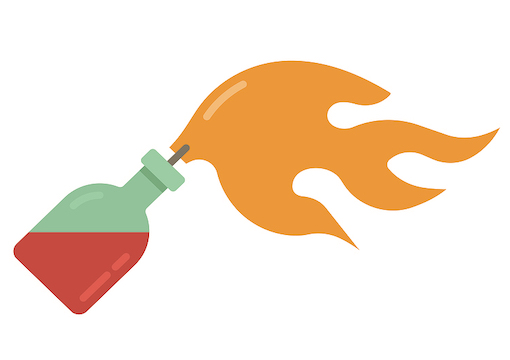 The entire mainstream media (plus Fox News!) have been assuring us that Portland was a tranquil town, with the occasional peaceful protest … until President Trump’s storm troopers showed up and turned it into a war zone.

This portrayal contrasts markedly with videos that have been posted on Twitter every night for more than two months now, especially by @MrAndyNgo, showing helmeted psychotics hurling Molotov cocktails at the police, among other acts of mindless destruction.

Whom to believe? Videos of the riots? Or smug journalists telling us that they saw nothing untoward?

Luckily, there’s the Newspaper of Record to give us the truth. Unluckily, The New York Times sent … Nicholas Kristof, aka the most easily fooled journalist in America.

Kristof assured Times readers that the Portland crowds are “entirely peaceful,” until around 11 p.m., when “some protesters begin to shoot fireworks or set small trash fires.”

Also: the federal courthouse, the Justice Center offices, statues, the Portland police union hall, and a decapitated pig’s head, among other arsons.

He further reports that — just as MSNBC has said! — “the most violent behavior overwhelmingly comes from the federal agents.”

“Nicholas Kristof, aka the most easily fooled journalist in America.”

Even without the vast collection of videos documenting the violent riots in Portland, Kristof has a long record of being conned by obvious frauds. Let’s review a few of his greatest hits.

In 2009, Kristof wrote a tear-jerker column titled, “Are We Going to Let John Die?” John was Oregon’s John Brodniak, who allegedly couldn’t get treatment for his cavernous hemangioma because he didn’t have health insurance:

“With John unable to work, he lost his job — and his insurance coverage … One hospital has told [John and his wife] not to come back unless he gets insurance, they say.”

(“They say” is widely recognized as evidence in the scientific literature.)

“Neighbors have helped, and a community program has paid the rent so that they are not homeless. But bills are piling up, and John and [his wife] Esther don’t know how they will cope.”

Moral of the story: Pass Obamacare now, you fools!

Then Michelle Malkin made a few phone calls and found out that John was enrolled in Medicaid and was being treated by top neurologists at the Oregon Health Sciences University in Portland. He’d been a patient there for weeks, including when Kristof wrote his column. Brodniak himself “reluctantly” admitted the truth to Malkin.

Hailing Somaly’s resilience, he once cited this incident as a heartbreaking relic of the trauma she’d suffered:

“To get to the stage, we took a freight elevator, and it was vaguely like a dark cage. That terrified Somaly, because it reminded her of the cages in which she had been punished and tortured when she was in the brothel.”

Then Newsweek investigated and it turned out Somaly — Kristof’s “friend and hero” — was a total fraud. Her childhood friends told the magazine that she’d grown up with her parents in their small village, gone to local schools, and had been “a happy, pretty girl with pigtails,” well liked and well known.

Still, wasn’t she doing good work with her charity? In one column, for example, Kristof featured Long Pross, one of the girls Somaly had rescued from a life of violence and prostitution:

“Pross was 13 and hadn’t even had her first period when a young woman kidnapped her and sold her to a brothel in Phnom Penh. The brothel owner, a woman as is typical, beat Pross and tortured her with electric current until finally the girl acquiesced.

“[She] gouged out Pross’s right eye with a piece of metal. At that point in telling her story, Pross broke down and we had to suspend the interview.

“Pross’s eye grew infected and monstrous, spraying blood and pus on customers, she later recounted. The owner discarded her …”

It turned out Pross had never been a prostitute, and she lost her eye during surgery on a nonmalignant tumor, which Newsweek ascertained using the little-known journalistic technique of … talking to people who knew her and obtaining her medical records.

There are more examples, such as the adventurer-turned-school builder promoted by Kristof (“[He’s] done more to advance U.S. interests in the region than the entire military and foreign policy apparatus of the Bush administration”) who was later the subject of a scathing “60 Minutes” expose — but let’s skip the others and get to my favorite.

Last year, Kristof interviewed an expert on Christianity as a special Easter treat for his readers. In the interview, Serene Jones, president of Union Theological Seminary, confirmed to Kristof that:

— God did not send his son to die for our sins.

I could end my column with that, but let’s continue. Jones sneeringly described the idea of “an abusive God-father who sends his own kid to the cross so God could forgive people” as — I quote — “nuts.”

— God is neither omnipotent nor omniscient. “That is a fabrication of Roman juridical theory and Greek mythology,” Jones exposited.

— Also, prayer doesn’t work and there’s no afterlife. (Speaking as a Christian practically drowning in the milk of human kindness, I sincerely hope they both believe that.)

This guy doesn’t even have a passing familiarity with the most fundamental elements of Christianity. But you can totally trust his reports from the bucolic streets of Portland.