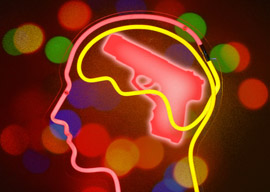 Is America exceptional? Once upon a time, hardly anyone dissented from the idea that the USA was different from all other nations. The “exceptional” sobriquet made the rounds when it became obvious that hereditary status and class distinctions did not count in America, leaving individuals free to be judged on their merits alone.

I write this partly in shock, as I had driven by the bucolic village of Newtown, Connecticut only 12 hours before the massacre of 20 schoolchildren, six staff members, and the mass murderer’s own mother.

Is the mass murder of little children a uniquely American tragedy? Well, a Chinese crazy only last week attacked and stabbed 22 children in Henan province before police subdued him. The attack mirrored a similar one against Chinese children in 2010, where more than 20 children were slashed, with three of them dying. Another attack took place last August, when two children were stabbed in a middle school in Nanchang. Most of the Chinese attackers have been mentally disturbed men unable to adjust to the rapid pace of social change in China, a country whose medical system’s ability to diagnose psychiatric illness is close to null.

“They died because their parents chose not to bear guns, as did their teachers.”

But”and this is a very big “but””the Chinese attackers used knives, not automatic weapons. No Glocks, no SIG Sauers, no .223-caliber Bushmaster rifles, all three of which were in possession of Adam Lanza, the Newtown mass murderer. These weapons are capable of extinguishing 26 lives in a matter of minutes. This is a uniquely American phenomenon. Even Washington’s gun lobby is going to have trouble with this one. Yes, I know the slogan: “Guns don”t kill, people do.” But how does one justify military-style, high-volume-of-fire weaponry in a modern society? All recent mass shootings of innocents in America, from Columbine to Virginia Tech, from Aurora to the Oregon mall, have involved high-tech weaponry. How far can the Constitution’s Second Amendment go”until we all murder each other?

It’s a horrible thing, but it’s only when it hits close to home that such horrors get to us. The fact that Gaza’s children are habitually shot dead because of Israeli-Hamas differences is reported on a par with football scores. African massacres of tots are not even reported”much ado about nothing. Northern Sudan’s enforced famine on the Christian south has killed countless innocent children, but the chief architect of the horror, Sudanese President Omar al-Bashir, was awarded a seat on the Economic and Social Council of the United Nations.