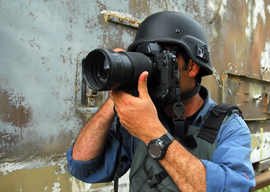 Er, no offense to people being beheaded in the Middle East but, uh, what are you doing there?

James Foley had been abducted before. In 2011 he was detained while reporting on the Libyan civil war. Why did he go back? Was it because we need “reporting”? This is 2014. The jihadists upload videos themselves. In a bizarre twist of irony, that’s how we know who James Foley is. We have Twitter and Facebook and Instagram and everyone has a cell phone. I”m not sure we need you anymore. Same goes for the Scotsman David Haines, who was beheaded while working as a humanitarian in Syria. Dude, you have two kids at home. What were you thinking?

It’s profoundly unfashionable to consider, but is it possible that some of these people have a lust for martyrdom? Our president is being criticized for not reacting more strongly to these beheadings, but they weren”t diplomats or members of our military. This isn”t the Archduke Franz Ferdinand. We”re talking about people who knowingly strolled into hell.

I”d liken them more to the extreme mountain climber who expects the taxpayer to blow tens of thousands of dollars sending in helicopters when things go awry. Don”t do the crime if you can”t do the time. But those of us who are well-stationed here on Western soil can”t help but ask ourselves, “Why are you doing the crime?”

War reporters were a crucial part of our history. The photos Robert Capa took on D-Day are invaluable records of what was arguably the worst day ever. Even the reporting done during Vietnam is crucial to our correct documentation of the war. But today”when it’s hard to find something that isn”t on YouTube five minutes after it happens? It makes you wonder why someone would supply a product with so little demand. Cliven Bundy got in a lot of trouble for wondering. Would you mind if I took some time out of my busy day to do so anyway?

When Dr. Kent Brantly went to Africa to help fight Ebola, he got Ebola. Ann Coulter has accused him of “marinating himself in medieval diseases of the Third World.” She suggested he might have stayed here in America, where there are plenty of atheists to mission to on your doorstep. The backlash against this statement was amazing because here in the real world, everyone around the water cooler was saying the same thing: “What was he doing there?”

Got News? founder Charles C. Johnson came under fire for not appreciating Foley’s last words: “I call on my friends, family, and loved ones to rise up against my real killers”the U.S. government”for what will happen to me is only a result of their complacency and criminality.” I kind of agree with Johnson. What happened to spitting in the enemy’s face? Ever heard of “Go fuck yourself”?

I would never criticize the military for fighting on our behalf. It’s not their job to question orders, and we owe everything we have to a history of men dying for us. Unfortunately, the line between heroic soldier and suicidal buffoon is being forcibly blurred by our self-loathing culture. Bowe Berghdal wasn”t that different from Foley. He wasn”t a soldier. He was a suicidal volunteer. Before being captured, Bowe (who spells it “Bowe” anyhow? It’s Beau) had wandered into enemy territory many times. He didn”t know what he was doing there and appeared to sympathize with the jihadists. Six dead soldiers later we had rescued him from his own pathetic self (I”ll resist crowbarring Chelsea Manning into this hypothesis, but what a mess that guy is). Even if you love your country and want to fight for it, your fate can still be torpedoed into martyrdom. The president has just allotted $763 million and thousands of troops to go fight Ebola in West Africa. Trust Obama to turn our troops into suicide bombers. At least Dr. Kent Brantly had a choice.