America’s Role in a Darkening Age 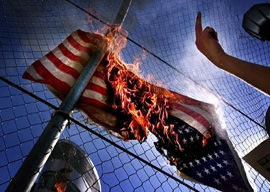 When, in the 1950s, Nikita Khrushchev said, “We will bury you,” and, “Your children will live under communism,” Eisenhower’s America scoffed.

America had suffered a decade of defeats. Southeast Asia had fallen. The ayatollah had seized power in Iran. Moscow had occupied Afghanistan. Cuban troops were in Ethiopia and Angola. Grenada and Nicaragua had fallen to the Soviet bloc. Eurocommunism was all the rage on the continent.

Now, 20 years on, the wheel has turned again—toward darkness.

No longer do we hear chatter about “The End of History” and triumph of democratic capitalism, of America imposing her “global hegemony” or leading mankind into “a second American century.”

“When did the internal affairs of foreign nations become the portfolio of American diplomats?”

The hubris is gone, and triumphalism has given way to anxiety, apprehension, alarm.

In an essay, “The Return of Toxic Nationalism,” Robert Kaplan, a geopolitical analyst for Stratfor, writes that Western elites are even yet failing to see the larger, darker picture of our evolving world.

These elites identify with the like-minded in other lands and “prefer not to see the regressive and exclusivist forces … that are mightily reshaping the future.”

Egypt and the Mideast offer “a panorama of sectarianism and religious and ethnic divides. Freedom, at least in its initial stages, unleashes not only individual identity but, more crucially, the freedom to identify with a blood-based solidarity group. Beyond that group, feelings of love and humanity do not apply.”

This is “a signal lesson of the Arab Spring,” and out of it will likely come an “Islamist-Nasserite regime” in Cairo.

“Asia is in the midst of a feverish arms race,” writes Kaplan. Nationalism there is “young and vibrant—as it was in the West in the 19th and 20th centuries.” Having consolidated the homeland, China is moving to annex her adjacent seas, and a formerly pacifist Japan is “rediscovering nationalism as a default option.”

Nationalism is “alive and thriving in India and Russia,” with New Delhi building armed forces that will be among the world’s largest.

“Race hatred against Muslims is high among Russians, and just as there are large rallies by civil-society types, there are also marches and protests by skinheads and neo-Nazis, who are less well-covered by Western media.”