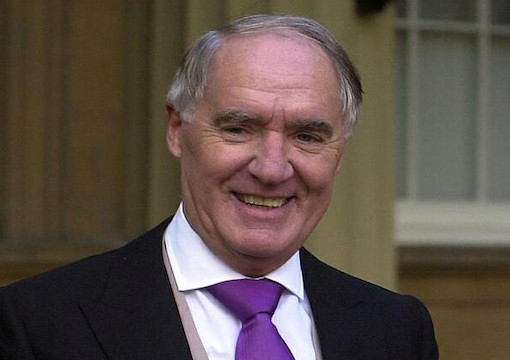 GSTAAD—I was very friendly with the late Sir David Barclay, a man who treasured his privacy and was not drawn to alpine high jinks and gossip. It was, as prolegomenon to the most British of understatements, an unlikely friendship. We met on the slopes a long time ago. I had just finished a run and was taking off my skis when he approached me and asked if my name was Taki. I nodded to the affirmative and he said, “I like your column.” After all these years I have a standard answer when a rare compliment comes my way, and it’s the following: “What is an intelligent person like you doing reading the rubbish I write?” His answer was quick and to the point: “I own The Spectator, I have to read it—but I still like your column.”

And, as they say, that was the beginning of a beautiful friendship. David and his wife, Reyna, refused to play the games people play in resorts. Midnight revelries with bizarre caricatures of nouveaux riches phony tough guys were not their cup of tea. Nor were long, languorous drunken lunches up at the Eagle Club. Instead, David and Reyna would take a season membership at the club, come up once a week at most, lunch at a corner table at the end of the main terrace, leave a large tip, and take the chairlift back down while some of us were still arriving for lunch. They were extremely polite to all, especially the staff, but did not mix with anyone. Except for yours truly.

“We regularly had lunch together with our wives, and he never once allowed me to pay.”

This, needless to say, did not endear the Barclays to ambitious hostesses or other pushy types who use Gstaad as a place to network. They knew who he was and what he owned, but they couldn’t get near enough to talk business. “What are his interests?” asked a frothing-at-the-mouth promoter of I cannot remember what. “Religious matters,” I told him.

The irony of my white lie was that David was very interested in religion, quoted scripture, and often talked about the Catholic Church with me. We regularly had lunch together with our wives, and he never once allowed me to pay. The Barclay brothers owned hotels and ships, as did my father, and David said something very wise about shipping: “In and out is the trick.” Having watched shipping rates go up and down throughout my life, I recognized a smart theory when I heard one. (Greek shipowners are always in it for the long haul.)

He loved The Telegraph and The Spectator, read both cover to cover, and we talked about the news at lunch. Like me, he was outraged that we were cutting people off from their past and discrediting our ancestors. “Liberty depends on memory,” he said. “Doing away with the past is the chief technique of modern tyrants.” What follows may sound corny, but my chats with him encouraged virtue as he tried to reawaken the power of sympathy in a world too far gone in the complexities of science and abstraction.

Well, one more of the good guys is now gone, which makes me wonder why so many turds are still around. Never mind, c’est la vie, as they say in the land of cheese. I now ski with my son and daughter, who film me and tell me how great I’m doing. I never imagined I’d get to the stage of being pathetic enough for my children to say how well I’m skiing. Perhaps if I could see better I’d attack the moguls, as they say, rather than have them direct my descent. But getting old means getting scared, and although I’m not at all afraid of having a go against some jerk on the slopes, I am scared of falling at speed. Hence I go slow and look like many Greek shipowners looked when they took up skiing in the ’50s.

The good news is that despite some reticence on the slopes, I do not suffer from generational angst, so prevalent among some of our youth today, nor am I crippled with anxiety over a missed message in the never-ending 24-hour communications nightmare of today’s social media. As every bar, restaurant, and nightclub is closed, texting has replaced human contact, or so I’m informed, as I am very proud not to know how or be able to use social media. But over the telephone, one of the good doctors here told me of a horrendous case involving a new private club started by a man who used to sell Madoff funds. He is now rehabilitated and raised a fortune for a new place on top of a mountain for those who could not get into the Eagle Club. People have dubbed it Club de Losers, but I think it might turn out to be a success. Its members are the very old who don’t ski, and the very young who do. Not a bad combo. It has cost as much as 250,000 Swiss francs to join, and as little as 100,000. The good doctor told me that the first party held at the club caused 80 percent of those attending to catch the virus, each and every one infected turning into a superspreader.

Last March it was an Eagle party that spread the crud, this year the new boy on the block did. I think the clubs on St James’s are a better bet.