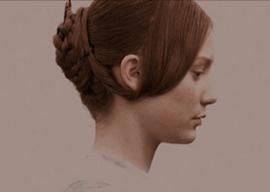 The latest movie adaptation of Jane Eyre is slowly rolling out nationally via art-house theaters, but the plot of Charlotte BrontÃ«’s three-volume novel remains wonderfully commercial.

The spookily pale Mia Wasikowska (Alice in Wonderland) plays the poor but plucky governess, while Michael Fassbender is her rich but moody employer, the Byronic Mr. Rochester.

Wasikowska, 21, is made up to look as old-fashioned and Plain Jane as possible. When illuminated by candlelight, she resembles the subject of a Vermeer painting or of Leonardo’s Lady with an Ermine. Wasikowska delivers her dialogue with the impassioned precision required to render BrontÃ«’s highly august lines comprehensible: “If God had gifted me with some beauty and much wealth, I should have made it as hard for you to leave me as it is now for me to leave you.”

Appropriately for Mr. Rochester, whose secret misfortune has led to dissipation, Fassbender is 33 but looks 40. In a role made famous by Orson Welles in 1944, this previously obscure actor is also terrific.

“What we are left with seems rather like Jane Eyre if Jane Austen had written it.”

In the BrontÃ« sisters” annus mirabilis of 1847, Emily BrontÃ«’s wilder, crazier Wuthering Heights took longer to catch on, while Charlotte’s Jane Eyre was an immediate bestseller.

The primary markets for 19th-century novels were commercial lending libraries, which operated much like the now-fading Blockbuster video stores. They preferred novels that were long enough to be split into three books, each of which could be lent out simultaneously. This gave Charlotte a sizable canvas.

In an era when images were expensive to reproduce and novelists were paid to create pictures in the mind, Charlotte went a little lighter than expected on the landscape descriptions, leaving her more room for story. So she shoved in every damn thing imaginable, mashing up numerous genres”romance, social criticism, Bildungsroman, Gothic horror, and even proto-detective. Yet somehow, Charlotte made it compulsively readable.