An Alien Pod Person in a Room Full of Leftists 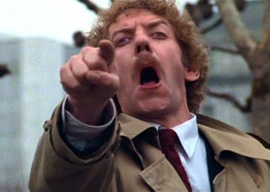 There is a phenomenon here in the Northeast where being conservative—no, wait, being not left—is to turn everyone in the room into Donald Sutherland from Invasion of the Body Snatchers, screaming and pointing at you as if you’re an alien pod person.

I hear Berkeley is bad, and Madison is the only place I’ve ever seen one-person protest marches, but here in New York things are intense. It is a given that the political right is a cartoon pig who will do anything for money and wants everyone who isn’t a cartoon pig to die. The End. Nobody has ever questioned this and every time I do, it creates a hole in the space-time continuum that swallows the entire universe, or at least ruins the party.

During a break while I was working on a travel show recently, Anthony Bourdain was sitting at the lunch table and mentioned he’d like to skin Glenn Beck alive. Everyone nodded as if he’d said he enjoys tiramisu. I kept my mouth shut. A few months earlier I was in a similar environment when a cameraman casually mentioned he’d like to “kick Sarah Palin in the cunt.” This got the same placid reaction and when I begged to differ, it started a two-hour argument that ruined everybody’s day. That’s the problem with grazing amid a leftist herd. You’re constantly on the edge of a huge argument.

But when you don’t say anything, you hate yourself. I was on vacation in Mexico with a group consisting mostly of comedy writers, and a conversation began about Al Gore’s wonderfulness. I kept my mouth shut because I didn’t want to bum everyone out (especially my wife), but I didn’t sleep well that night and it still bothers me.

“How did we get to this point? The way I remember things, the left used to be the chin-scratching, idea-weighing side where dissent was encouraged.”

During a dinner party in Maine, the hostess told us a bunch of Internet rednecks ruined the immigration-reform bill on which she’d been working. I confessed I was one of said rednecks, and a nice dinner turned into a nice big fight that ended the night early. As everyone angrily grabbed their coats, the host said to my wife, “Your husband is a big bore,” and we haven’t been invited back, but I have no regrets about that night.

How did we get to this point? The way I remember things, the left used to be the chin-scratching, idea-weighing side where dissent was encouraged. I don’t think my views have changed. I still hate the government and despite the laughter it brings, I’d still call myself a feminist. The problem is, when the president is black and the fanatics who are oppressing women are brown, it’s racist to complain about the government and religion. The left went from thinking outside the box to becoming myopically fixated on anything that sounds mean or benefits “white males” (AKA someone who reminds them of dad). What remains is a sea of knee-jerk liberals who aren’t just intolerant of other points of view, they literally can’t handle the truth.

I don’t get that from the other side. Maybe it’s because the so-called conservatives I know live in the eye of the storm, but if you say something to William McGowan or Peter Brimelow or John Carney or even Jared Taylor that totally contradicts their beliefs, they’re as polite as British butlers. They’ve usually heard the point before and after a nod will say, “Yeah, but…” followed by a calm and reasonable explanation of why they think I’m wrong. When they say something about our Lord Jesus Christ, I don’t have to wonder whether I’m dropping a neutron bomb on the evening by disagreeing. I just speak my mind. Isn’t that was conversations are all about? Isn’t that what makes us superior to animals? It’s not genes that got us here, it’s memes. While monkeys scream oooh-eeeh-aaah-aah to no avail, we say to our fellow cavemen, “Stay away from saber-toothed tigers. I just saw them eat some dude.”

Last Saturday, I was staying with an old friend in Hudson, NY, and he had a bunch of people over who were mostly fellow musicians and filmmakers. I was in a room full of artistes whom I didn’t know and was regaling them with stories of having sex after having kids because most of them were still single and thought it was funny. Things were going swimmingly until I made the mistake of bringing up The New York Times and how they are so anti-family they pretend homosexuals banging in a parking lot are just like the dads in the same parking lot taking their kids to soccer games. This led the conversation to the Times’ glowing review of Mark Ruffalo’s anti-normal-family movie The Kids Are All Right, and one of the women at the party mentioned her film company is presenting Ruffalo an award next week for his grassroots work in the fight against fracking. Uh-oh. Here we go again.

“Oh yeah, fracking,” I said. “That horrible thing that gives us 90% of our natural gas.” A filmmaker there named Tony laughed because he assumed I was kidding, but when I assured I him I was serious he said, “Wait, do you believe in global warming?” What happened next is what happens every time you depart from orthodoxy: group panic. We’ve all been there. You don’t want to wreck everyone’s good time and you wish everyone could keep cool, but allowing their hysteria to censor you is ridiculous, so you open your big mouth. “I’m dubious,” I said. He didn’t believe me. I assured him I wasn’t kidding. He remained skeptical. I finally convinced him I wasn’t playing devil’s advocate.

Bang! Tony is up on his feet and his finger is in my face. (They always do that.) “Do you realize that 60% of this country believes in creationism? That’s who you’re associating yourself with. Do you believe in creationism, too?” I stood up and tried to explain the logical fallacy of guilt by association, but now his wife and two other people were standing and finger-pointing, too. “Don’t you think it’s strange that the science against global warming is all funded by oil companies?” Then they did this thing liberals do where they make a sarcastic idiot face with their finger on their chin and say, “Hmm, I wonder why that could be? Gee, I guess they care about science. Yeah, that’s it.” I had to yell to be heard at this point and kept saying, “I don’t care who’s saying it or what anyone’s motive is to say anything. John Wayne Gacy can tell me murder is wrong, and it’s still wrong. All I care about is the facts.” I told them Hitler used toilet paper but that doesn’t mean we’re tied in with his shit just because we use it, too. I even yelled, “All cats are mammals. All dogs are mammals. All cats are not dogs.” But I couldn’t get a word in edgewise. This screaming match wasn’t meant to get to the truth. It was meant to wake me up from being an ignorant heretic who’d chosen the Dark Side. They allowed zero possibility I knew what I was talking about. I disagreed with them and therefore I was ignorant.