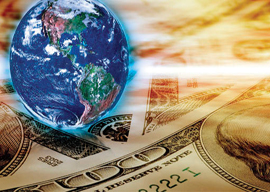 When the bloated and declawed Las Vegas casino-money recipient Newt Gingrich had some fun recently over Mitt Romney’s ability to speak a few words of French, Europeans took notice of this farce. The French are an angry nation: envious, supercilious, and eager to show superiority over those who invented Coca-Cola and the Big Mac. They are also forgetful, especially their amnesia regarding Uncle Sam’s military forays to save la France profonde, as Charles de Gaulle called the land of cheese and perennial German domination.

Jealousy is often provoked by losing something you once had to someone else. In Europe’s case, that “something” is power. Instead of learning to emulate the strategies and systems that have made the US a superpower, many of the European elite, as well as the proverbial man in the street”especially l”homme de la rue“decry Europe’s McDonaldification and endlessly whine about American philistinism. This malicious envy of Uncle Sam is nothing new. It’s been around for at least fifty years. But after George W. and Obama, it seems to be getting worse. Bush was a philistine and his Iraq folly was shared by Tony Blair, a far bigger philistine and phony.

“Bashing wealth creators isn”t new, but back home in the good old US of A, very few outside the media take it seriously.”

In a recent column, London mayor Boris Johnson wrote that Britain will never get off the pot until the Brits learn to admire success. He noted that unemployment is falling in the US, where wealth creators such as Mark Zuckerberg are generally applauded rather than denounced. However disgusting and intellectually dishonest (my words, not Boris’s) Zuckerberg may be, his success is undeniable, as was his maniacal determination as an undergraduate to become rich. Boris claims this would never happen at Oxbridge.

I”m afraid that I agree with him. I cannot see a European Zuckerberg emerging. I envision debates in European parliaments about the scale of his prospective wealth and whether it was tolerable in a fair society. Anti-capitalist protesters would shut the city down and tents would appear on his office lawns. Such aimless rage is not conducive to wealth creation. This is one of the reasons that most Greek shipowners live outside Greece. A Greek citizen cannot do business unless he or she has a partner inside the government. I don”t think anyone in Congress has as yet approached Zuckerberg to help him push through legislation favorable to Facebook. This is the simple difference between the old and new continents.