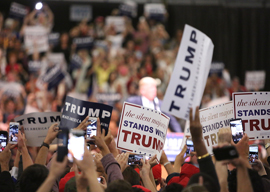 Among many in the silent majority, Clintonian democracy is not an improvement upon the old republic; it is the corruption of it.

Consider: Six months ago, Virginia Gov. Terry McAuliffe, the Clinton bundler, announced that by executive action he would convert 200,000 convicted felons into eligible voters by November.

If that is democracy, many will say, to hell with it.

And if felons decide the electoral votes of Virginia, and Virginia decides who is our next U.S. president, are we obligated to honor that election?

In 1824, Gen. Andrew Jackson ran first in popular and electoral votes. But, short of a majority, the matter went to the House.

There, Speaker Henry Clay and John Quincy Adams delivered the presidency to Adams—and Adams made Clay secretary of state, putting him on the path to the presidency that had been taken by Jefferson, Madison, Monroe and Adams himself.

Were Jackson’s people wrong to regard as a “corrupt bargain” the deal that robbed the general of the presidency?

The establishment also recoiled in horror from Milwaukee Sheriff Dave Clarke’s declaration that it is now “torches and pitchforks time.”

Yet, some of us recall another time, when Supreme Court Justice William O. Douglas wrote in “Points of Rebellion”:

“We must realize that today’s Establishment is the new George III. Whether it will continue to adhere to his tactics, we do not know. If it does, the redress, honored in tradition, is also revolution.”

Baby-boomer radicals loved it, raising their fists in defiance of Richard Nixon and Spiro Agnew.

But now that it is the populist-nationalist right that is moving beyond the niceties of liberal democracy to save the America that they love, elitist enthusiasm for “revolution” seems more constrained.

What goes around comes around.