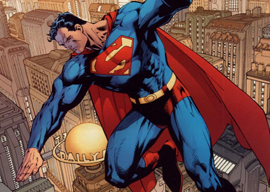 There were two huge stories last week in American mythmaking: The United States has slain Public Enemy Number One, and Superman is renouncing his American citizenship. Barack Obama may exult in the first, but he should beware the second. The Man of Steel’s renunciation of his adopted homeland may represent more in American mythology than the extrajudicial execution of a terrorist in Pakistan. Osama bin Laden, for all his pretensions, was a mere mortal. Superman is the stuff of dreams”primarily the American dream. The dream was a vision of the immigrant making good and embracing the country more meaningfully than those born there and taking it for granted. Now he is turning away. It is as if our first immigrants, the Pilgrims, were boarding the Mayflower to sail back to England.

For those who have been busy following White House pronouncements and news from Pakistan, here is what happened in the latest issue of Action Comics: Superman returns from observing popular demonstrations in Iran, and the National Security Advisor upbraids him for giving the appearance of representing the president. Superman answers,

I realize that, and you”re right, of course. Which is why I intend to speak before the United Nations tomorrow and inform them that I am renouncing my US citizenship. I”m tired of having my actions construed as instruments of US policy.

“Are we capable of turning our backs forever on government assassination, torture, and arbitrary imprisonment?”

When Joe Shuster and Jerry Siegel created Superman in 1932, the caped hero fought for “truth and justice.” This was later changed to “truth, tolerance, and justice.” (Anyone remember “tolerance”?) The “American way” part replaced “tolerance” during the McCarthy years, around when the phrase “under God” was added to the Pledge of Allegiance. Loyalty and oaths were the order of the day, and Superman adapted. Most of us did if we wanted to keep our jobs.

Shuster and Siegel were two Jewish kids living in Cleveland and struggling with their immigrant parents to survive the Depression and achieve acceptance in a sometimes-hostile American culture. Blair Kramer wrote on the Jewish Virtual Library website:

Despite his superhuman powers, Superman shared some characteristic traits with a majority of American Jews in the 1940s. Like them, he had arrived in America from a foreign world. His entire family”in fact his entire race”had been wiped out in a holocaust-like disaster on his home planet, Krypton….Superman’s parents launched him to Earth in hopes that he would survive.

It resonated among many Americans, Jewish and Gentile alike, during the Depression and Second World War. Superman’s first foes were slumlords, corrupt businessmen, extortionists, wife-beaters, and the politicians who protected them. Super-villains such as Brainiac and Galactic Golem came later, replacing the villainous slumlords and corrupt businessmen who maybe were not so bad after all.

Superman, unlike the super guy in the White House, believed in the law. His pursuit of criminals usually ended not with him beating them to death (which he had more than enough power to do), but in turning them over to the police and the courts. Those who favor vengeance over justice, whatever the crime, might have preferred Superman to be a freelance executioner.