An Inopportune Rape (Or, How I Learned to Hate the Left) 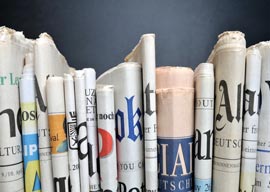 Did you hear? CNN took the photo of biracial Umpqua College mass killer Chris Harper-Mercer and turned him white! Lightened his skin, thinned his nose, flared his nostrils…the whole Voldemort treatment. Damn racist liberal media! Except it turned out to be a hoax. Some 4chan troll decided to see if today’s conservatives are gullible enough to believe that the Photoshopped Mercer pic was from CNN even though there was no link, no screenshot, no logo, graphics, or chyron to identify it as being from CNN. Mission accomplished, troll.

Every time I try to kill a conservative-targeting hoax, and it’s something I seem to be doing a lot these days, I”m always asked why it matters. I think the “albino Mercer” hoax provides a decent opportunity for me to answer that question while, at the same time, allowing me to tell the story of the day I went from not liking the left to downright hating it.

To begin with, conservatives who claim to be fighting the “liberal media” will be hopelessly ineffective at the task if they don”t take a few minutes to understand the artistry of how left-leaning journalists distort the truth. Because of course the mainstream media plays politically correct games with race. But not by Photoshopping a new face onto a biracial killer. Anyone who thought CNN would go that far is mentally deficient. These journalists are far more clever than that, and we remain ignorant of their methods at our own risk.

I”ll give you a few genuine examples of how the media plays games with race, using my hometown paper of record, the L.A. Times (the paper with the fourth-largest circulation in the U.S.), as a case study. In July 2002, two Inglewood, Calif., cops were accused of roughing up a black gentleman. The Times trumpeted the story”two white cops beat an innocent black dude. Except that one of the cops, Bijan Darvish, was Persian. His LAPD file read “nonwhite/Persian.” Times ombudswoman Jamie Gold admitted to me that calling him white violated Times policy (“officers must be described as they are in their police file”), but she sent me several paragraphs of text arguing that Persians are white whether they admit it or not. Essentially, her argument was “we violated our policy, but we didn”t lie.”

“For the Times editors, this was a disaster. Thompson was black; Happe was not just white but blond.”

That’s pure artistry! Ginning up a white-on-black incident, maybe selling a few extra papers, maybe provoking a riot or two, but having a back-pocket rationalization to refute accusations of lying.

Another example is a front-page Times story from 2002 about a plague of black and Hispanic pedestrian deaths. Blacks and Hispanics were being run over at “disproportional” rates. Were racist L.A. drivers targeting people of color? As enticing a plotline for a 1970s blaxploitation film as that may be, there was a problem: In the article, the figures of black and Hispanic pedestrian deaths were shown individually, while the white and Asian figures were lumped together. When I requested the complete figures from Times writer Hugo Martin, it turned out that whites were not being spared pedestrian hit-and-run deaths, but Asians were hit by cars at such an abnormally low rate that by combining the Asian stats with the white stats it gave the impression that both races were mysteriously safe from being struck while crossing a street (yet another example of Asians throwing off a curve). Again, a ginned-up “blacks and Hispanics are being victimized” story, but not as the result of an outright lie. Rather, just a crafty combination of otherwise accurate figures. Pure artistry.

During the 2003 recall election that put Arnold Schwarzenegger in the governor’s mansion, the Times produced a pre-recall poll that was so off, so obviously inaccurate (it showed Schwarzenegger losing by a huge margin to Hispanic Democrat Cruz Bustamante), even rival polling organizations cried foul. As the Field Poll organization pointed out, the Times had creatively overrepresented blacks and Asians among the respondents. And as I found out, after several phone calls to Times polling czarina Susan Pinkus, she had even more creatively overrepresented “white Hispanics” in the “white” category (an easy enough task, as over half of U.S. Hispanics list their race as white). Hence the lopsided and totally unrealistic numbers for Bustamante. Yet again, not so much a lie as the wily use of racial categorizing to engender a pro-Democrat result.

Sometimes, though, even the finest cunning can”t avoid disaster. In July 2002, a 5-year-old white girl in Orange County was abducted while playing in her front yard (her corpse was found soon after; she had been raped and suffocated). The Times, like every other local news organ, covered the story vigorously. Sadly for a paper that tries to avoid coverage of minority-on-white crime, when the rapist-murderer was caught, he turned out to be Latino. Caught unprepared, Times editors had to think fast. No, they didn”t Photoshop him as an albino; that would have been stupid and clumsy. Rather, they ran a piece practically apologizing for giving coverage to the disappearance of a white girl, and they ran a second piece assuring their readers that white people are more statistically likely than Latinos to be kidnapping rapist-murderers. See, they turned it into a teachable moment! Genius.

But what happens when a case provides no opportunity for cover and no room for shenanigans? That brings us to Roberta Happe and, by extension, my own personal Henry V “no mercy, no prisoners” moment regarding the left.

Roberta Happe was a beautiful 23-year-old woman, a recent graduate from USC with a business degree who eschewed the corporate world to devote her life to working with disadvantaged, developmentally disabled children. One evening in February 2001, as Happe was leaving work, she was abducted in a parking garage by a man named Jason Thompson, who made her drive to an ATM, where she was forced to withdraw $400. Thompson then raped, tortured, beat, stabbed, and strangled Happe, leaving her naked body in a Culver City park. By the next day, the LAPD had identified Thompson as the assailant. He”d left behind fingerprints, DNA, and his image on the ATM security camera. An APB was put out for Thompson, who”due to the horrifically brutal nature of the crime”was considered a major risk to strike again.