An Interview With James Goad 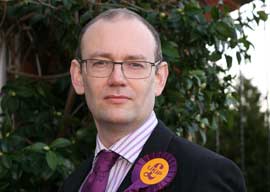 James Goad is the Chairman of the Worcester City branch of the United Kingdom Independence Party (UKIP). Despite the best efforts of many to dismiss the UKIP as a “fringe” group, it beat both the Labour and Conservative parties in the UK’s 2014 European elections.

The UKIP is one of those horrifying, xenophobic, fascist, race-baiting, “right-wing extremist” parties you keep hearing about that reemerged from the ghosts of WWII to threaten the very integrity of the European Union and block the ultimate triumph of one-world government with all its attendant blessings. Parties such as the UKIP”which are emerging across Europe and are gaining power yet are far from dominant”seem to grievously prick the tender sensibilities of those who wish to erase all borders and have us all share the same bread, the same hopes, and the same stench.

Mr. Goad and I also share the same first and last names”though it’s typically only nuns and judges who”ve called me “James””so I elected to interview him via email. For the sake of cultural rapprochement, I decided to keep all his silly, quirky British misspellings of American words intact.

JIM GOAD: Your Twitter profile describes you as a “classical liberal.” I read Nigel Farage describing the UKIP as “traditional conservative.” What’s the difference?
JAMES GOAD: I take “traditional conservative” to mean an adherence to traditional British values. It differs in that it’s more of a social philosophy, whereas “classical liberalism” perhaps has more specific political and economic elements, advocating small government, economic models with limited government interventions, along with civil liberties under British common law. Farage has described himself as “a 19th century liberal” and his comments on limiting the current massive welfare state in Britain are consistent with old liberal philosophy. Whatever Nigel meant about traditional conservatism, I’m sure there’s a big overlap with traditional liberalism. I’m sure a real student of philosophy could pick me apart on this, but I don’t claim to be an expert.

Your party is often called racist, misogynistic, and Islamophobic. Is it true, and either way, is it bad to be called these things nowadays?
This is all utter bollocks, yet the liberal lefties in the mainstream media and a large minority of the British people buy into it. It’s almost like a default setting when confronted with uncomfortable truths: Smear your opponent with these labels and avoid any real debate at all costs. It’s exceptionally tedious yet predictable. UKIP deserves scrutiny as a relative political newcomer, but media focus on a select few nutjobs and pensioners recalling the “good old days” is a gross distortion of what we represent.

“Despite the best efforts of many to dismiss the UKIP as a “fringe” group, it beat both the Labour and Conservative parties in the UK’s 2014 European elections.”

[Racism, misogyny, and Islamophobia] do seem to be the three main “evils” of the politically correct these days and also appear to mean different things to different people.

Racism“in the UK this is now misapplied: It seems to now extend to any sort of hostility to foreign nationals in addition to people of a different race. A clear conflation with xenophobia.

Misogyny“evidently any comment that might be construed mildly sexist, but also is not true of UKIP (more female Members of the European Parliament than any other party and they’re all there by merit, not all-female shortlists), but that doesn’t stop the accusations.

Islamophobia“I’ll quote Christopher Hitchens on this: “Islamophobia is a word created by fascists, and used by cowards, to manipulate morons.” I’ll go along with that.

This article will be published on Monday, which is the Martin Luther King, Jr. national holiday in America. Thoughts on the man? How are race relations different in England than they are in the USA?
I’m aware you’re not much of a fan of his, but I’m no expert on the man’s life and work. I’d just say that he appeared to help the black cause a great deal and that was a great thing. His elevation to near sainthood is an unfortunate side effect that helps distort who the real person was.

Race relations appear not to be quite as polarised in the UK than the US. However, I’ve never even been to the US and I don’t know if what I have seen and read is close to the truth. We let migrants from the West Indies come in from the 1950s to fill labour shortages. This caused a lot of social upheaval at the time, but you can’t say that it’s been a bad thing for the country. Black Caribbeans ultimately integrated quite well. Indians and Chinese, too. Pakistanis less well”there has been some ghettoisation in many cities, particularly in the North of England.

What about Islam?
It’s interesting that if you criticise anything these days, including Islam, you are automatically labelled “phobic” about it. Ardent Muslims who are intolerant (to put it mildly) of apostates and infidels (all of us non-Muslims, apparently) aren’t accused of being infidelphobic, which is rather unfair. The politically correct just won’t allow it. It might be seen as being nasty to brown people and therefore racist. The Paris shootings and the child-grooming scandals in the UK have once again thrown Western discomfort with the Islam-Muslim issue out into the open. Nigel Farage was pilloried for stating that there are a “very very small” number of British Muslim passport holders who are “a Fifth Column” in our midst and hate us. He went on to say that the deliberate policy of creating a multicultural Europe has created problems with people who don’t share our fundamental values. Obvious and fair points, but not if you’d gone by the press reaction.

What’s the main thing that you personally don”t understand about America or Americans?
I don’t understand the US government’s constant destabilising foreign interventions when it should be clear by now that they are largely counter-productive. I’m with Ron Paul on his foreign policy stance. The “policemen of the world” thing has become unsustainable, yet your government hasn’t really scaled back the imperialism very much. Considering your public debts I would have thought that was something of a priority.

What’s wrong with the EU, and why does the UKIP oppose it?
The short version: loss of sovereignty, “open-door” mass immigration, federalization, and a draining of economic strength and dilution of national identity.

(To read the long version of his answer”and yes, it’s long”click HERE.)