An Open Letter to Jordan Peele 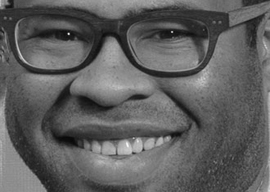 Former president Jimmy Carter is seen by some, rightly or wrongly, as someone who has never been terribly fond of Jews. I would argue that even if a case can be made that Carter has a beef against living Jews, he’s pretty enamored of dead ones. After all, he’s the president who launched the U.S. Holocaust Memorial Museum. He also helped create the Nazi-hunting branch of the Justice Department: the OSI. No, not the OSI (“Office of Scientific Intelligence”) that built the world’s first bionic man on the hit 1970s TV show The Six Million Dollar Man. This OSI was the Office of Special Investigations, and the 6 million it concerned itself with had nothing to do with cyborgs.

If you were a Jew killed during the Holocaust, ol’ Jimmy had your back! Your fate would be memorialized and your killers brought to justice.

In 1978, Carter signed H.R. 12509, which amended the Immigration and Nationality Act to provide for the deportation of anyone who participated in the persecution of Jews in Nazi Germany from March 1933 through May 1945. The lack of definition regarding what was considered “persecution” basically meant that anyone who discriminated against a Jew in any way during the prewar, pre-Holocaust years could be deported (put another way, it was now a deportable offense to have treated a Jew in 1930s Germany the way blacks were routinely and legally treated in the U.S. at the same time).

Last week, The Hollywood Reporter announced that director/writer/comedian Jordan Peele will be following up his megahit movie Get Out with a new TV series:

Peele is set to executive produce the drama ‘The Hunt,’ a 1970s-set Nazi hunter drama from Sonar Entertainment. Inspired by true events, ‘The Hunt’ follows a diverse band of Nazi hunters in 1970s America as they set out on a quest for revenge and justice—tracking and killing hundreds of Nazis who, with the unconscionable help of the U.S. government, escaped justice and embedded themselves in American society. Sources say the package started going around town following the Charlottesville, Va., neo-Nazi protest and counter protest.

If Peele is going to reach back to the 1970s for a drama about America’s real-life Nazi hunters, I owe it to him, as a fan and a Holocaust author, to offer some advice. So I’m going to break format and pen an open letter to this popular young artist.

“For the saucy little imps at the OSI, the Aunt Esther to their Fred Sanford was anyone who cared about due process.”

Normally, when I write about entertainment-industry types, it’s with scorn and derision. But I genuinely like your work, and I think it’s great that you’ve reached a point in your career where you can basically write your own ticket. But when I read that your new “1970s true-life Nazi hunters” show was going to be a drama, I was rather startled, because the subject has so much comedic potential! No offense if I’m overstepping my boundaries here, but it’s just that you’re only 39 years old, and your co-producer and writer on the new series, David Weil, looks…how can I put this gingerly…like he’s barely old enough to have pubes. So please indulge an old man’s free advice!

The story of the OSI is the cockeyed tale of a wacky squad of lovable rascals who set out to catch Nazis but ended up ruining the lives of a whole bunch of innocent people. Think Serpico, but starring Michael Winslow. It’s true dark comedy, Jordan. Elderly people getting hurt, powerful men in government abusing immigrants. Belly-laugh material!

When you hear “war criminal,” you probably think of effete German supervillains with machine guns, like Hans Landa in Inglourious Basterds. And while there were high-profile German rocket scientists who incurred the OSI’s wrath, they were not accused of Holocaust-related atrocities. Rather, they were accused of using forced labor in their factories. And let’s be frank; the forced-labor thing doesn’t make for particularly unique villainy, especially since the British were also totally into that whole forced-labor fad themselves! In fact, the Brits had entire slave nations full of people of color to work to death. So I’d suggest skipping the “evil Nazi rocket scientist” bit.

What you want are the hands-on, machine-gunning, Jew-gassing Landa types. Well, for those you won’t have to worry about whether your actors can do a good German accent. The overwhelming majority of the people accused by the OSI of up-close-and-personal Jew murders were Eastern Europeans. Immigrants—people who had fled to the U.S. to escape persecution after the Soviet Union enveloped their homeland. And the Soviets waged one hell of a long-distance war against those immigrants, who they saw as “escapees.” You know how, these days, people talk about how vengeful and petty Vladimir Putin is? How he’ll ruthlessly go after enemies living abroad? Well, the Kremlin was just as bad in the ’70s. Worse, even, as entire groups, not just individuals, were targeted.

See, the OSI never actually prosecuted people for WWII war crimes; the U.S. had no jurisdiction. The Soviets would send the OSI “evidence” that this or that Eastern European immigrant had been the “Butcher of Będzin” or the “Mangler of Makarska” or the “Psycho of Subotica,” and the OSI would accept that “evidence” without question and ship the person off to face Soviet-style “justice” (the deportation proceedings were civil, not criminal, so the right to a jury trial and various other protections afforded criminal defendants did not apply). As Murray Stein of the Justice Department told The Christian Science Monitor in 1986 regarding Soviet evidence (“Methods Questioned in War-Crimes Extradition,” 2/29/86), “We don’t challenge their (the Soviets’) papers and they don’t challenge ours. You can’t have relations with other governments if you don’t trust them.”

Keep in mind that many of the immigrants ordered deported based on unchallenged Soviet evidence faced execution “back home.”

As you know, Jordan, every good TV comedy has to have an “archnemesis” series regular. For the saucy little imps at the OSI, the Aunt Esther to their Fred Sanford was anyone who cared about due process. 1970s and ’80s newspapers were filled with headlines like “American Jurists Express Doubts on Soviet Evidence in U.S. Nazi Cases” (L.A. Times, 4/27/86), “Soviet Evidence Violates US Rules in Nazi Case” (CSM, 11/8/85), “Nazi-Hunting Unit’s Tactics Being Probed: Justice Department Is Actively Investigating Allegations of Prosecutorial Misconduct by Members of the OSI” (L.A. Daily Journal, 3/2/90), “Nazi-Hunt Methods Protested” (Washington Post, 3/23/85), “U.S. Probing Perjury Claims Against Nazi-Hunting Unit” (L.A. Times, 8/17/90), “OSI Power Abuse” (San Francisco Examiner, 12/11/86), and “Soviet Aide Warned U.S. on War Crime Evidence” (L.A. Times, 4/28/86). In that last article, it was revealed that a Soviet official straight-out told the OSI about “deceptive” Soviet evidence, and the OSI brushed him off.

Most of the OSI’s critics came to the same conclusion: The OSI—possibly inadvertently, possibly not—was helping the Soviets wage a politically motivated war “to discredit anti-Soviet emigre communities” (L.A. Times, 4/27/86).

To address these criticisms, the Justice Department sent a letter to Congress in 1990, arguing that in war-crimes cases, the OSI “was not obligated to examine the truthfulness or get corroboration of witnesses’ statements in extradition cases” (CSM, 2/29/86). So there you have it; there was no attempt to examine or authenticate the “evidence” that was being used to strip naturalized citizens of their status and deport them to face execution in foreign lands.

Pretty funny stuff, eh, Jordan? I mean, it wouldn’t be funny if it were done to Latinos. But Slavs, though somewhat swarthy, aren’t quite dark enough to matter to “social justice” advocates. So rest assured, you can build episode after episode around the following real-life examples of high comedy, and no one will care enough about the villains to mind their fate:

Frank Walus, a Polish immigrant living in Chicago, was accused in the late ’70s of having been a brutal Gestapo officer who mercilessly killed Jews in occupied Poland. Based on Soviet evidence and the testimony of survivors, Walus was denaturalized and ordered deported. And then a few judges actually examined the evidence. Turned out Walus was a teenager at the time of the supposed murders. Conscripted by the Nazis, he was a prisoner, a child laborer, working on a farm in Germany. Oh, and he was barely 5’4”, way below the height requirement for joining the Gestapo. The government dropped all charges, but the stress of the experience broke him. He died from multiple heart attacks in 1994.