An Open Letter to Justin Trudeau 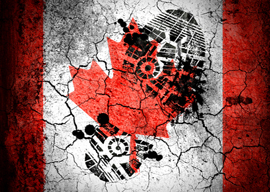 (Assuming that IS your legitimate surname. Since you’ve evidently inherited your mother’s looks AND brains, your real father might not be Canada’s 15th Prime Minister but rather one of your mom’s multiple boyfriends”Ted Kennedy or, God help us, Ronnie Wood. Shall we arrange a DNA test”or a driving exam”to determine paternity?)

Anyhow, belated congratulations on winning the leadership of the Liberal Party of Canada.

Of course, that’s a bit like the old quiz-show joke: First prize is one week in Philadelphia, and second prize is two weeks in Philadelphia. Except in your case, first prize is actually third prize: the leadership of the once mighty “natural governing party of Canada,” now shriveled down to a measly 35 parliamentary seats out of 308.

Still, this somewhat dubious “accomplishment” is the greatest achievement in your forty-one-year-old life, and like all your other “accomplishments,” it was mostly possible because you have a famous last name and nice hair. You didn’t earn your new post after years of hard, thankless work and sacrifice. You won a fixed genetic lottery.

“You live in the moral equivalent of your father’s basement.”

At your age, your father, Pierre“I’ll play along”had a Canadian law degree and a Master’s from Harvard, had founded a hugely influential political journal, and then served as Minister of Justice under Lester B. Pearson.

You, on the other hand, are a drama teacher.

As I’ve said many times: You live in the moral equivalent of your father’s basement.

Of course, Canada, like much of the West, is currently overrun with carefully coiffed, pleasant-enough, basement-dwelling forty-one-year-old “men” with useless degrees.

Another reason you were chosen to lead, I suspect.

The ruling Conservative Party wasted no time after your victory in pushing out a faintly amusing attack ad reminding voters of just a few of your many gaffes: your objection to the word “barbaric” to describe honor killings; your comment that Quebecers are “superior” to other Canadians. (They left out the bit where you cursed out another member of Parliament”then called on him to apologize.)

They needn’t have bothered, really. As one commentator put it, you’re your own attack ad, a kind of rhetorical suicide bomber.

Which brings us to your latest bungle.

Just a couple of hours after the attack, the state broadcaster wound up a softball interview by asking you about the Boston Marathon bombings and how you would respond if you were PM.

“People have died, many people are injured,” the CBC’s Peter Mansbridge said to you. “You’re the Canadian prime minister, what do you do?”

As I’m sure you’d prefer to forget, you replied, “[W]e have to look at the root causes.”

But there is no question that this happened because there is someone who feels completely excluded, completely at war with innocents, at war with a society. And our approach has to be, “OK, where do those tensions come from?”