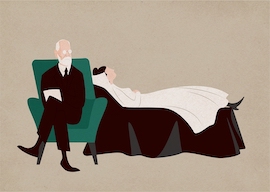 Oy vey! Corporate moralizing is as sick as it gets, and virtue signaling by Gillette reminds me of the joker who killed his parents and asked the jury for mercy because he was an orphan. The American Psychological Association (APA) is probably the greatest con job ever invented, and it has recently released guidelines on how to screw the American people further. The APA has an annual budget of $115 million, and 117,500 shrinks are members.

The guidelines basically say that being a male is a very bad thing. Male qualities such as courage, personal ambition, and grace under pressure are psychologically harmful. The APA advises that qualities such as self-reliance and competitiveness should be rooted out. I do not have $115 million per annum and cannot claim 117,500 friends, but my advice to my readers is to root out every psychologist they know and, if need be, shoot them dead.

Now, I don’t think too many Americans take psychology seriously, at least Americans who don’t live in Hollywood or New York, but I once told Clement Freud, grandson of the great fraud Sigmund, what I thought of him and his effing family—alas, London is crawling with them—and he tried to get me fired by going behind my back and claiming that I was an anti-Semite. My Jewish editor at the time did not believe him, and after Freud’s death it was revealed that he was a rapist.

“I don’t think too many Americans take psychology seriously, at least Americans who don’t live in Hollywood or New York.”

Oh, yes, I almost forgot—all these creeps who hate men and want us all to become womanlike are very left-wing. When Trump was elected, I have it on good authority, people working for The New York Times needed nonstop colonoscopies to clear their brains. Many of them needed shrinks to calm them down. The treatment had the opposite effect. But the colonoscopies worked. Two of the columnists, Roger Cohen and Paul Krugman, set a record by having a colonoscopy every day, sometime twice a day, since the election. The Times building needs to be fumigated daily.

One of the reasons I’ve always been opposed to socialism and socialists is because they always seem to want to ban things. Or to discourage people from activities they enjoy, such as smoking, drinking, boxing, hunting foxes on horseback, kissing girls, flirting, and trying to seduce the fairer sex—you name it, lefties hate it. And wish to stop it. Basically I find it incongruous to want to ban things in the incongruously named Land of the Free.

Daily outrage by the usual suspects in the media is now the goût du jour. The anti-Trump media has convinced itself by quoting itself that The Donald is a Russian plant. And Putin is now Count Dracula, sucking our blood nightly. I like Putin and Russia, and prefer them to Hollywood and Silicon Valley and Facebook and the rest of the gangster billionaires. After the end of the Cold War and after the Berlin Wall came down, NATO served no useful purpose except to allow the crooks in Brussels to play big man and for it to metamorphose into a crusading human-rights war machine. The warmongering hysteria of the two Gulf wars is proof of why we need NATO. To make neocons play big man on campus.

Ditto for the #MeToo movement. It is completely over-the-top, but Hollywood and the media are scared shitless of it. Land of the Free, Home of the Brave, who are they kidding? This is Savonarola and Torquemada time. Total banishment for noncriminal offenses smacks of 1984 but worse. I never thought I’d see America turn into a terror state by the scum that is Hollywood and the left-wing creeps of feminism and the media. An editor lost his job at a left-wing magazine because he allowed a self-confessed woman abuser to write a mea culpa in his organ. (I know the editor and he himself is sort of a creep.)

But let’s get serious. Shining a spotlight on the awfulness of men is the latest opportunistic play for selling razors. What I didn’t know was that there were so many hairy women in America. I thought most of them were in Italy and Greece. And Spain, and Latin America. Poor Lady Liberty, we’ll have to paint a mustache on her soon. But back to the psychologists. Their mumbo jumbo makes double-talk resemble a Platonic conversation. According to those creepy fellows, it’s white privilege and WASP culture that have enshrined these bad habits into our lives. So once again, I will paraphrase the Bard, Henry IV Part 2, and “Let’s kill all the shrinks.”