Anarchy in the U.S.A. 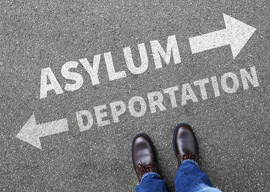 The latest Muslim massacre has driven the mainstream media absolutely berserk with fear and loathing…but not, though, of the Muslim terrorist who murdered 49 Latino gays in Florida. Instead, the bad guy is Donald Trump for having been demonstrated to be right about immigration policy.

The GOP candidate offered a sensible speech on Monday on reforming our immigration system to work better for Americans:

But the current politically correct response cripples our ability to talk and think and act clearly…. The bottom line is that the only reason the killer was in America in the first place was because we allowed his family to come here…. We have a dysfunctional immigration system which does not permit us to know who we let into our country, and it does not permit us to protect our citizens.

Of course, Trump’s pragmatism was also calibrated to drive mad with rage the bipartisan Washington establishment that has grown rich off the conventional wisdom of Invade the World/Invite the World. Trump noted:

Ask yourself, who is really the friend of women and the LGBT community, Donald Trump with his actions, or Hillary Clinton with her words? Clinton wants to allow radical Islamic terrorists to pour into our country”they enslave women, and murder gays.

The New York Times, for example, threw aside all pretense of objectivity, “reporting”:

Mr. Trump’s speech…represented an extraordinary break from the longstanding rhetorical norms of American presidential nominees. But if his language more closely resembled a European nationalist’s than a mainstream Republican’s, he was wagering that voters are stirred more by their fears of Islamic terrorism than any concerns they may have about his flouting traditions of tolerance and respect for religious diversity.

This characterization of Trump’s rhetoric reveals more about the momentum of the conventional wisdom”anything other than Open Borders is Hitlerism”than it does about the candidate.

“When you find yourself in a hole, stop digging. “

The Orlando Latino gay slaughter is a nightmare for the establishment because Florida is a purple state with 29 electoral votes. And while the mainstream efforts to elicit Hispanic racialism haven”t gotten all that far outside of La Raza circles, gays have become a popular sacralized group. Trump’s alt-center offer to defend gays from Muslims is part of his clever divide-and-rule strategy aimed at the obvious (but henceforth unspeakable) divisions among the Obama Coalition.

As I”ve been pointing out for years, the Democrats” coalition of the fringes has been held together only by the KKKrazy Glue of egging on paranoid fantasies against straight white men.

But the GOP upstart is asking gays: Who is more likely to be on your side: Donald Trump or Omar Mateen?

Personally, I”ve been to Trump Tower, and I”d guess that the GOP candidate employed more than a few gay men to decorate it.

Trump’s speech on Monday even touched on a sore point that I”ve been noting since the 2013 Boston Marathon bombing by two nephews of the former son-in-law of top CIA insider Graham Fuller: that the American imperial apparatus negligently rewards overseas allies, like the Tsarnaev brothers” Uncle Ruslan, an international pipeline lawyer, with visas for their unstable relatives. Trump briefly pointed out:

Back in 2013 the editor of the New York Times editorial page was so annoyed by rare examples of skepticism about letting in the Tsarnaevs as refugees that he expounded:

And when did the United States start excluding immigrants from dangerous places? Seems to me that [the Tsarnaevs] fall into the categories of “huddled masses yearning to breathe free,” not to mention “wretched refuse” of teeming shores and the “homeless, tempest-tossed.”

After all, the fact that everybody in the world has the civil right to immigrate to America is written into the Zeroth Amendment to the Constitution. Granted, it’s not actually a law that any American ever voted on, it’s just an 1883 poem by Zionist Emma Lazarus. But how dare any candidate for president not treat it like holy writ just because it’s all bogus retconning by the New York media?

Some of the press” rage is due to the craven assumption that if we don”t roll over and let in more Muslim immigrants, then the ones who are here already will get really mad and kill us all for sure. After all, the reasoning goes, the U.S. has already let in many Muslims, so therefore we must let in more. As Christopher Caldwell noted in 2009:

Thus, the mainstream’s main talking point since the Orlando carnage has been that the Muslim terrorist was an “American citizen.” (Omar Mateen was born an anchor baby in the U.S.)

So if any efforts are made to limit Muslim immigration in the future, the current Muslims will have every right to go nuts and slaughter Americans in countless numbers. Or something. (You are supposed to believe that this argument that it’s too late to change so don”t even think about it has nothing at all to do with powerful and influential people trying to evade responsibility for bad decisions they”ve made in the past.)

Of course, the reality that several of the most notorious Muslim terrorists of recent years have been brought up here or even born here is an extremely bad argument for more pedal-to-the-metal immigration policies. Instead, it suggests that America’s Magic Dirt doesn”t automatically assimilate Muslims. That Muslim immigrant terrorism is likely to go on for at least a generation is, rationally speaking, an argument for heightened prudence, not an argument for increased negligence. When you find yourself in a hole, stop digging.

And yet, the United States has been plagued before by immigrant terrorism, and completely solved the problem.

How? Largely by selective deportations of radical immigrants and cutting back on future immigration.

Immigrant terrorists committed many of the most heinous crimes during the anarchism plague of the first third of the 20th century. Anarchists are largely forgotten today, but they were a spectacular annoyance a century ago.