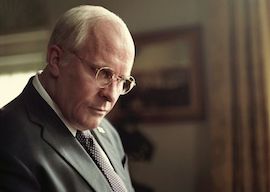 With a trio that strong (although Steve Carell is clownish as Cheney’s mentor-turned-wingman Donald Rumsfeld), a wise writer-director would get out of their way and let them act. Indeed, the biopic’s adroit trailer largely consists of a single scene of Bale and Rockwell superbly reenacting the masterful Cheney agreeing to be the callow Bush’s running mate in 2000.

Unfortunately, “wise” is not the word for Adam McKay, Will Ferrell’s writer from Saturday Night Live and director of the mortgage meltdown movie The Big Short.

McKay’s addiction to attention-calling auteur gimmickry—such as dreaming up an obnoxious narrator who knows all about Cheney because (spoiler alert) he ends up being the donor for the ex-veep’s 2012 heart transplant—didn’t sink The Big Short. But that was due to McKay having a fine Michael Lewis airport book as the backbone for that movie. But I can’t recall a film since Midnight Cowboy in which the director needlessly distracts from his stars more than Vice.

And as a screenwriter, McKay is scattershot, giving the impression that he spent the George W. Bush era hate-watching Fox News and now intends to have his say on absolutely everything that happened ten to eighteen years ago. Rather than focusing on a single dramatic arc, such as Cheney’s two wars with Iraq, McKay can’t keep himself from inserting brief references to multitudinous nearly forgotten imbroglios, such as whether Cheney could meet with oil company CEOs in secret—controversies that weren’t very exciting even when they were happening. Vice winds up being neither tragic nor comic: It’s like Anchorman without laughs.

Moreover, McKay utterly bypasses the one interesting mystery still surrounding Dick Cheney’s career: What happened in the 1990s following Cheney’s impressive performance as George H.W. Bush’s Secretary of Defense that then led to his disastrous years as George W. Bush’s veep? Why did the man who prudently sided with GHWB to not go to Baghdad in 1991 fanatically encourage GWB to go to Baghdad in 2003?

McKay never even raises this question.

Although McKay delves into various minutiae of Cheney’s career all the way back to his ambitious girlfriend Lynne reading him the riot act when he was a drunk-driving Yale dropout in 1963, the biopic completely disregards the most famous drama of Cheney’s life before 9/11: the 1991 Gulf War. McKay portrays Cheney as merely a ruthless hack, so showing the defense secretary efficiently managing the short, triumphant 1991 Gulf War would confuse the movie’s simplistic Bald Man Bad message.

In a 1994 interview, Cheney explained why his administration had decided not to overthrow Saddam:

Because if we’d gone to Baghdad we would have been all alone…. There would have been a U.S. occupation of Iraq. None of the Arab forces that were willing to fight with us in Kuwait were willing to invade Iraq. Once you got to Iraq and took it over, took down Saddam Hussein’s government, then what are you going to put in its place? That’s a very volatile part of the world, and if you take down the central government of Iraq, you could very easily end up seeing pieces of Iraq fly off.

“I can’t recall a film since Midnight Cowboy in which the director needlessly distracts from his stars more than Vice.”

Six months after the U.S. victory in Kuwait, the Soviet Union collapsed. With no occupation of Iraq requiring funds, in 1992 Cheney decisively slashed defense spending.

California’s military-industrial complex, which had helped the GOP carry the Golden State in nine of the previous ten presidential elections, was devastated, and California hasn’t voted Republican since. But Cheney’s peace divided helped the national economy boom in the 1990s. Vice of course also omits this evidence of Cheney’s good stewardship under the elder Bush.

Aristotle said of tragedy: “Its action should be single and complete, presenting a reversal of fortune, involving persons renowned and of superior attainments…”

There’s a tragic symmetry to the two central decisions of Cheney’s career. In 1991 he helped choose not to invade Iraq, which led to peace and prosperity, but electoral defeat. In 2001–2003 he connived endlessly to invade Iraq, bringing reelection in 2004, but also protracted war and financial ruin in 2008.

Somebody could make an impressive work of art out of this plotline, but not Adam McKay, who refuses to acknowledge anything was ever worthy in Cheney (other than his being nice to his lesbian daughter).

Why did Cheney change his mind about invading Iraq? Vice references the elder Bush losing the 1992 election, which no doubt played some role. But that mostly makes sense from within the neoconservative worldview in which endless smashing of Arab states is the highest priority.

And, as far as I can recall, McKay doesn’t even mention the word “neoconservative” in his movie, even though both Mr. and Mrs. Cheney were affiliated with the neocon American Enterprise Institute from 1993.

AEI had long been a worthy but dull advocate of Chamber of Commerce conservatism, delivering many a comprehensive study of worker’s-comp reform. But it discovered that there was more donor money in agitating for war with Israel’s enemies. Over the course of the 1990s, neocons at AEI and elsewhere became obsessed with taking out Saddam.

On Twitter on Sunday, McKay defended his plot, saying he’d substituted big oil for the neocons:

Fully aware of The Project for New American Century. And the letter they wrote to Clinton calling for overthrow of Saddam. We chose to acknowledge the pre-meditated nature of the invasion of Iraq through the energy commission and the maps of Iraqi oil fields…

But, in reality, the oil companies weren’t terribly enthusiastic for the Iraq War before it happened and didn’t profit much from it later. Instead of No War for Oil, we got War for No Oil.

But for the preservation of one’s Hollywood career, it’s better to blame the energy industry. This might explain an otherwise puzzling speech in Vice in which McKay implies that Israel, like France and Germany, was against the war. In contrast to the oil business, the Israelis, while they would have preferred a U.S. attack on Iran, at least got the destruction of Iraq and, later, Syria out of it.

In Cheney’s defense, he articulated his “one percent doctrine” about how the threat of a “low-probability, high-impact event,” such as al-Qaeda setting off a nuclear bomb in Times Square, justified the Iraq War:

If there’s a one percent chance that Pakistani scientists are helping al-Qaeda build or develop a nuclear weapon, we have to treat it as a certainty in terms of our response.

Cheney’s unarticulated math would apparently be: If the U.S. invading Iraq reduces the chance of a nuclear bomb going off in New York and killing one million Americans by just one percent, that would, in effect, save 10,000 American lives. (U.S. fatalities in the war turned out to be around 4,500.)

But of course Cheney’s war didn’t do anything to reduce the threat of nuclear terrorism, because he attacked the wrong country. If anything, it made America more at risk for blowback from the relatives of the dead.

Another theory for the Iraq Attaq is that Cheney correctly saw the problems inherent in the U.S. being tied too closely to its appalling ally, Saudi Arabia. So, he wanted a new, improved best friend forever for the U.S. in the Persian Gulf: Iraq. If so, Cheney deserves credit for deducing the strategic problem, but not for finding a solution.

Other possibilities for why Cheney in the 2000s was more paranoid and irrational than in 1991 include psychological or cognitive side effects from all his heart problems. During Bush’s second term, Washington buzzed with rumors that the VP had become a “pump head.”

Or Cheney’s thinking may have gotten warped in an apocalyptic direction, which the neocons could exploit, by his participation for many years, along with Rumsfeld, in a secret program started by the Reagan administration to provide continuity of government in case the actual federal government was decapitated by a Soviet nuclear strike. Cheney and Rumsfeld, who’d held high positions at young ages in the Ford administration, test-drove doomsday scenarios in underground bunkers as chiefs of staff to Reagan cabinet members pretending to be Acting Presidents.

Did this Strangelovian playacting influence Cheney’s personality, when after 9/11 he disappeared to undisclosed locations? Did this incline him to latch on to bogus theories about how Saddam would nuke America? Perhaps. But don’t look to McKay’s movie for any mention.

There is, however, at least one thing to be said in defense of McKay’s efforts: Unlike everything else these days, Vice doesn’t end with a tacked-on epilogue about how this is really about…Trump.