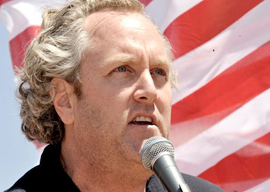 It’s stressful to be hated. It goes against our instincts. We want to be loved. But Andrew Breitbart was different. He relished his enemies and laughed when they threatened him. He wasn”t scared of conflict. He thought it was fun. He was, as Greg Gutfeld put it, “The bravest person I ever met.”

When I was on Greg’s show Red Eye with Breitbart we were asked what we thought of Trump sponsoring a GOP debate. Greg and I had the knee-jerk reaction of scoffing at the whole thing. When Breitbart asked us what was so funny we said, “Well, it’s obviously just some rich guy showboating.” Then he taught me a word I never really paid attention to before: “So?”

This word defines Breitbart to me more than any other. At a bar one night I was whining about the allegation that all libertarians are funded by the Koch brothers. “So?” he replied. Andrew didn”t play the PC left’s game. Libertarians don”t get magical checks from the Koch brothers, but so what if they did? George Soros spends billions paying people he likes. There’s nothing wrong with that, either.

“You don”t act defeated when someone such as Andrew Breitbart dies, you fight.”

Another evening we were both arguing with someone who still believed government can create jobs. She was from Madison and like all liberals there, she saw Governor Scott Walker as a union-busting thug who hated the working man. I explained that Walker’s privatization created way more jobs than the government did and she said, “Yeah, but they were all just tourism jobs.” Breitbart ended the whole argument with, “So?”

What a word. It’s only two letters but it shows the PC left they”ve never thought past the silly hysteria that surrounds their accusations. Oil companies have had record profits this year. So? That’s what they”re supposed to do. Up in Canada, my father has been fighting with the local schoolboard because they are hiring fundamentalist Muslims as guidance counselors. The trustee in charge of the program said my father’s comments could be construed as anti-Islamic and I was surprised to see him explain why they are not. “You need to learn Breitbart’s magic word,” I said in an email. “When she calls you anti-Islamic, say, “So?”” This was yesterday.

I once asked Andrew where it all came from. Where did he get the hubris to take on the whole world? “I woke up one day,” he told me, smiling with a drink in his hand (despite accusations, he didn”t do drugs), “and I said, “What Would Andrew Do?” From that day forward I did whatever I wanted and said exactly what was on my mind.” His boldness was contagious. Days after meeting him you catch yourself strutting down the street with your chest puffed-out yelling, “So?” at everyone who has a problem.