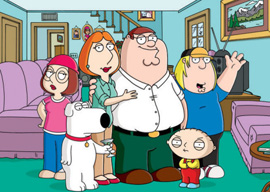 It says a great deal about a nation when its most telling artistic achievements are cartoons. Yet this is precisely the situation in modern American culture.

With such fare as The Simpsons, Family Guy, South Park, and the now-canceled King of the Hill and Futurama providing some of the most witty and insightful commentary available, modern society stands in a unique historic position—a children’s genre is now the only means through which adult themes are routinely expressed.

Notable commentary of the kind simply not provided in any other format is as follows (some familiarity with the characters is presumed):

The Simpsons: “One Fish, Two Fish, Blowfish, Blue Fish”
The best of this series, combining humor with damning critique of humanity. Homer mistakenly has eaten the fugu fish’s deadly toxin in a sushi restaurant. He has one day to live. Following his rush through a list of “final acts,” he slumps in an easy chair awaiting the inevitable. He awakes the next morning rejoicing in his survival with a multitude of promises to turn over a new leaf and live with purpose. The pertinent moments occur during the credits (and are often cut or hurry-screened in syndication). These scant seconds show Homer once more eating potato chips, sitting on the sofa, and watching a televised bowling game. The score’s sedate narration juxtaposed with the man who was recently so desperate to live but is again wasting his existence is perhaps the most cutting commentary ever scripted for television: delicate, nuanced, and brutal.

“It says a great deal about a nation when its most telling artistic achievements are cartoons.”

King of the Hill: “A Rover Runs Though It”
Peggy Hill and her family return to the ranch where she was raised, still having a contentious relationship with her harsh mother and laconic father. It is her son Bobby’s first experience in the countryside. Peggy soon learns the homestead is now in jeopardy due to rising land values and taxation caused by “Hollywood types” who use the area for leisure rather than cattle. Through a series of comedic maneuvers, Peggy saves the farm. It’s entertaining but banal—until the end, when instead of gratitude, Peggy’s mother remains passive-aggressive. In a fury, the injured adult daughter gathers the family to leave but is stalled by her husband, Hank. After listening to her complaints, he says: “If saving the farm didn’t fix things between you and your Mom, then I guess nothing will.” She asks with injured anger, “Then why did we even bother to come?” Hank nods toward their son astride a horse on a nearby rise over the sunset.

Family Guy: “When You Wish Upon a Weinstein”
Though originally banned, this early entry in the series delves into the “myth” that Jews are good with finances. While only “anti-Semitic” under the most hysterical definition of the term, it pokes fun at one of the minority groups rarely given the same treatment elsewhere on television.

Futurama: “Godfellas”
The robot Bender finds himself adrift in space with no hope of rescue. Galactic microbes form on his metal body with whom he can communicate and who promptly recognize him as their god. His attempts to eagerly help them result in ruin. His attempts to ignore them similarly result in ruin. Then he discovers a separate micro-civilization on his backside. In spite of his attempts to intervene, the societies go to war and are mutually destroyed. Then Bender bumps into God, who tries to teach him that in terms of intervention, “You have to get it just right.” When did television last touch on predestination, salvation, prayer, meditation, and also had a cigar-smoking robot who referenced Arthur C. Clarke? Precisely.