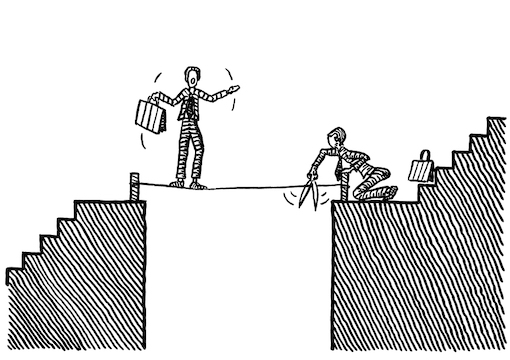 GSTAAD—Hippocrates is known as the father of Western medicine, and he diagnosed and named the disease “micropoulaki” during the Periclean period, around 430 BC. He did not call it a virus, but a sickness of the brain. Some years later, Aristotle described the micropoulaki syndrome as a disease, but one that was not contagious: “No more than a fool can influence an intelligent fellow to act foolish.”

Micropoulaki in classical Greek translates as having a tiny willy. Strange as it may seem, although micropoulaki by definition should exempt women, they are nevertheless known to suffer from its symptoms, although to be fair, not as often and as badly as men do. The symptoms are terrible: feverish envy, raging periods of jealousy, hysterical fulminations, foaming at the mouth, howling at the moon, blustering, and so on. And inventing facts.

The irony of this sickness is that although man has invented the printing press, conquered various deadly diseases, come up with the bikini, flown up to the moon and back, and crossed the oceans underwater, he has not made a scintilla of progress against micropoulaki. It’s as bad today, perhaps worse, than it was when Hippocrates first diagnosed it in Athens. Alcibiades was the guinea pig. (All of the above can be checked with Professor Peter Jones.) Hippocrates noticed that when the extremely handsome, noble, and rich Alcibiades swaggered around the Pnyka beneath the Acropolis, some men began to froth at the mouth, others became disoriented and swore vengeance on the nobleman, while some went as far as to announce (fake) news of his imminent death. Most of the men who showed such symptoms had their names taken down and were examined by Hippocrates, and they all turned out to have very tiny willies, hence where the word derives from. Aristotle finished the job when in simple terms he announced that micropoulaki was none other than envy of one’s betters, and it was prevalent with men who had tiny penises and envied those with bigger ones. Tout court, as they say in the land of cheese, pun intended.

“Envy is a universal human failing, especially in America, a country of abundance and endless possibility.”

Micropoulaki breeds envy enzymes that in turn break down the immune system and promote infection. Those poor jerks from the British Guardian and the BBC who loathe Boris Johnson had their immune systems broken down long ago by this dreaded disease. Both The Guardian and the BBC have long been hotbeds of micropoulaki, yet the medical and scientific professions have been unable to help, such is the envy and frustration of those who work there.

Ditto The New York Times, where micropoulaki is raging and which has been seen as its epicenter for the past twenty years. The whole place became more infected when a younger family owner took over, one who was diagnosed at birth as a quintessential micropoulaki victim. Disaster ensued. The place became totally infected, with columnists such as Roger Cohen, Frank Bruni, Michelle Goldberg, and Thomas Friedman frothing at the mouth, the female writers outdoing the men in jealousy and hate. Studies commissioned by neutral sociologists showed that although micropoulaki is not contagious, it is nevertheless passed on by peer pressure or extreme inherited envy. Hence the fear and loathing that have spread among the mainstream American media against conservatives, the police, the armed forces, and binary people in general.

Envy is a universal human failing, especially in America, a country of abundance and endless possibility. This makes fertile ground for micropoulaki to spread among the envious who pretend that equality trumps ability. Micropoulaki thrives among those who define equality of outcome rather than equality of opportunity. And cultural Marxists, among whom micropoulaki is prevalent, occupy the heights of education, entertainment, and the mainstream media. What is to be done? I wish I knew. Only recently I advised a neocon acquaintance in Washington to seek medical help in the form of a penile extension. He went to a New York doctor recommended by The New York Times and had an extension. It’s too early to tell if he’s been cured of envy and jealousy, but mind you, he rages less against conservatives, the rich, the talented, and his social betters.

The irony is that poor immigrants in America who aspire to work hard and make it have enjoyed 100 percent immunity from the dreaded disease. Poverty pimps and those who encourage them to seek something for nothing are the most vulnerable. Last but not least, studies have shown that societies where micropoulaki is prevalent tend toward authoritarian Marxist cultures.