Another Battle Lost on the Playing-Fields of Eton 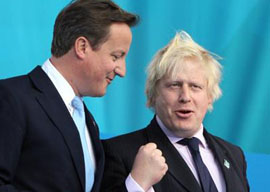 Referring to his most famous victory at the educational establishment he and so many of his officers attended, the Duke of Wellington is alleged (some say incorrectly) to have remarked:

The Battle of Waterloo was won on the playing-fields of Eton.

Another product of that school, George Orwell, said in 1941:

Probably the battle of Waterloo was won on the playing-fields of Eton, but the opening battles of all subsequent wars have been lost there. One of the dominant facts in English life during the past three quarters of a century has been the decay of ability in the ruling class.

The current situation in the British government leads me to believe that this Old Etonian-led cabal that rules the United Kingdom is very, very decayed. David Cameron is the 19th British prime minister to have been sent to school at Eton but the first since the OE (Old Etonian) triumvirate of Anthony Eden, Harold Macmillan, and Alec Douglas-Home in the late fifties and early sixties. He has surrounded himself with products of that famous independent school of some 1,300 pupils aged 13 to 18. Chief political theorist and Minister of State for Policy Oliver Letwin went there, as did Downing Street Chief of Staff Edward Llewellyn, as did Government Chief Whip Sir George Young.

What is amazing and unnerving is the concentration of power in that 572-year-old school in rural Berkshire.

I went to the same school and same house as David Cameron. I went on to the same university where I studied the same subject. Our fathers even worked in adjacent offices in the same London investment bank.

I do not disagree with OEs holding top jobs. Boris Johnson is hilarious and gifted as the mayor of London, Prince William is an excellent second heir apparent to the British throne, and Justin Welby seems fine so far as Archbishop of Canterbury. But I find it a little odd that so many of the top jobs are in the hands of alumni. This is not necessarily a great idea in terms of public confidence.

“While Old Etonians will continue to be a strong influence in the Conservative Party, they should be forever barred from running it.”

However, as this Conservative administration begins to realize that all hope of winning the next election outright has been lost and thus begins to tear itself apart in response, it becomes increasingly clear that it is because the prime minister and so many of those around him went to Eton”both in terms of how others perceive them and how they think and behave”that they have so damaged their party and thus, much more importantly, the country in its time of direst need.

Eton encourages many things, including many of the old-fashioned “manly” virtues so beloved of the imperial era (and Rudyard Kipling’s poetry). This may also be why historically Etonians have made good soldiers, and not just in the sense of being “officer class.” In World War I, 5,619 OEs served and more than a fifth of them died, double the rest of the Army’s mortality rate.

We used to exercise with the Army on Salisbury Plain, and there was no sight more unnerving to drivers passing through the town than fifty boys in tailcoats walking down the street with SA80 assault rifles on the way to our “individual weapon” familiarization class.

But the school encourages a self-sufficiency and confidence in one’s capabilities that can border on arrogance and a sense of entitlement. Increasingly Etonians have moved toward areas within the military, where this staunch individualist streak prospers, i.e., the Special Forces. Toward the extreme end of this you find the solitary adventurers and explorers”both Sir Ranulph Fiennes and Sir Wilfred Thesiger came from the school by way of the SAS.

The school has also had its fair share of rogues, buccaneers, and bounders who occasionally fall afoul of the law. For every ruthless but lawful financier such as Jimmy Goldsmith, there is a murderous Lord Lucan, his late friend. Two that I have known have remarked what a good preparation the school was for prison’s hardships and their subsequent “comebacks.” However, it also produced Captain Oates, who walked out to a certain and lonely death in the snow so he was no longer a burden to his colleagues in Scott’s doomed Antarctic expedition.

The other thing that the environment of the school, if not the institution, encourages to an extreme degree is the drive toward popularity. A great deal of the fortitude it develops is in the cruel solitude that is inflicted on those who inevitably fail at achieving that popularity.

Consider what would happen to one’s psyche, though, if one were to achieve popularity there and then ride the crest of that wave to university”joining the drinking clubs such as the Gridiron and Bullingdon”and then slide straight into politics along a route no doubt helped by one’s wealthy father being extremely well-known and liked. Too much ease, too much power. No enemy, no hostile terrain, no rough honesty from comrades to make sure that it never went to one’s head. Allow such a person to surround himself with likeminded friends. Then ask him to try and rule a country that has come to despise this sort of political elitism.