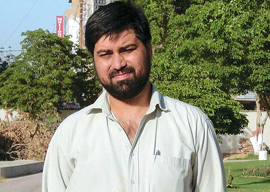 The first email came on May 31 from London’s Pluto Press, saying that one of their authors was missing and believed to be imprisoned. The author was forty-year-old journalist Syed Saleem Shahzad, whose reporting on Pakistan and Afghanistan was famously reliable and probing. As editor of Asia Despatch and Pakistan Bureau Chief of Hong Kong’s Asia Times Online, he had broken many important stories about the two wars raging in his region: the public conflict between the US and the Taliban and the covert struggle pitting the US against its ostensible Pakistani allies. The Taliban once kidnapped him in Afghanistan and then allowed him access to their cadres as a guest.

Author Nir Rosen has said: “When Syed Saleem Shahzad talks, I listen. He is the most fearless and reliable journalist covering Pakistan and Afghanistan, and that’s why his work is read even in the halls of the Pentagon.” Shahzad should have belonged to what Graham Greene called the “non-torturable” class. Theoretically, he was immune to harassment by Pakistani government apparatchiks. But clearly he wasn’t. “According to Human Rights Watch,” Asia Times announced, “Shahzad is being held for questioning in relation to an article in the Asia Times suggesting complicity between Al Qaeda and the Pakistani Navy.” The Asia Times article alleged that the Pakistani Navy conspired with al-Qaeda to attack one of Pakistan’s own naval air facilities near Karachi. Someone seemed angry that the story got out. When Shahzad disappeared, it seemed the intelligence services had kidnapped him to torture him into revealing his sources. Their methods of discovery would not stand scrutiny in a court of law. Shahzad’s friends, whom he had already told about intelligence-service threats to his life, were justifiably worried.

“They found his badly tortured corpse beside a canal about eighty miles from Islamabad.”

Pluto Press was in the process of publishing Shahzad’s new book, Inside Al-Qaeda and the Taliban: Beyond bin Laden and 9/11, destined to annoy many people in and out of Pakistan. Following Osama bin Laden’s assassination, it exposed Pakistani officialdom’s misdeeds at a time when its relations with Washington were especially precarious. The book includes interviews with key Taliban and al-Qaeda players who discuss their ideology, operations, and strategy. It exposed some of Pakistan’s links to al-Qaeda and the Taliban, and it demonstrated the Taliban’s reliance on indirect American funding. Shahzad had reported in 2003 on his conversation with a Taliban official who told him that American officers “distribute dollars to the tribal chiefs, local administrators and other concerned people for welfare projects….Not every penny, but most goes into Taliban projects to refuel their struggle.” This, combined with Patrick Cockburn’s excellent reports in London’s Independent on America’s extortion payments to the Taliban, depicted a war in which the US was effectively funding both sides.