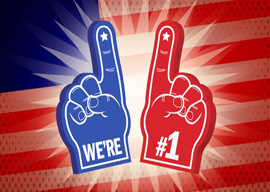 According to Joel Klein’s March 21 Newsweek column, “conservatives” went ballistic at their annual CPAC meeting in Washington because Obama had dared to question the holy doctrine of “American exceptionalism.” Supposedly Obama committed blasphemy when he observed that the British in the nineteenth century and the ancient Greeks thought of themselves as exceptional. We Americans are acting like other nations when we insist we”re unique. Obama’s crime was to have not noticed “our democratic institutions” and human-rights concepts, which have elevated us as moral giants above the rest of the human race.

This is a strange belief for people on the right to hold. For decades American conservatives were arguing that our society is decadent, much like the Roman Empire before it fell apart. Nor were these conservatives (speaking as a leading scholarly authority on this matter) pleased with “democratic” institutions, which they feared would lead to an uncontrollable central government that would confiscate our earnings in the name of equality. The religious right was complaining for decades that American morals were disintegrating and we were becoming the modern age’s Sodom and Gomorrah.

Suddenly we have become good and virtuous because of our uniquely democratic and proudly universal regime. This is an idea FOX viewers have picked up like a bad habit. I hear this gibberish when I make the mistake of watching Bill O”Reilly or Sean Hannity. We cannot mention history without first proclaiming that we are truly the best because we promote democratic values for everyone everywhere. To demonstrate our goodness, we send armies against those whose values we dislike. The newest opportunity for such constructive engagement is in Libya, where Charles Krauthammer announced on FOX that we must not leave before installing “a democratic, which means decent government.” This may require us to hang around for a while in the North African sand until we can get our exceptionalism to rub off on the Berbers.

“To demonstrate our goodness, we send armies against those whose values we dislike.”

But not to worry! A few nights ago on Greta Van Susteren’s show, George W. Bush announced that he and his wife are devoting the remainder of their lives to fighting “for women’s issues” in Muslim countries. The Bushes don”t want to see our troops leave Afghanistan until we can carry out their newest pro-female agenda. Perhaps even more significantly, the conservative movement’s leading intellectual Jonah Goldberg stated the following in his syndicated column on March 31: “Feminism as a “movement” in America is largely played out. The work here is mostly done.”

Goldberg, who celebrates the feminist success as a “conservative” accomplishment (why the hell not?), may have missed such recent earth-shaking events as the mammoth lawsuits launched by over 500,000 female employees against Walmart for promotion discrimination and the one with the Department of Education’s Civil Rights Agency against Yale University for sexual harassment. If only we could bring joyful events like these to Libya by dispatching an American trial lawyer, what a wonderful world this would be!