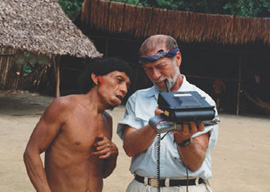 Controversial anthropologist Napoleon A. Chagnon released his new book Noble Savages: My Life Among Two Dangerous Tribes”the YanomamÃ¶ and the Anthropologists on Tuesday. The fact that his career has generated so much outrage is a shocking example of how widespread political correctness has become.

Anthropology used to be a science just like any other. Today it is a stomping ground for dogmatic lesbians and socialists with no balls. How did it get all the way over there? Isn’t anthropology merely old guys with white beards studying nomadic cavemen’s bones? My personal theory is this: In the 1970s, a lot of Jews, Marxists, and Marxist Jews decided sociobiology sounds too much like eugenics, and since that’s what the Nazis used to justify the Holocaust, this line of study is verboten. Anthropology was then changed from the nature-based science of human evolution to an art that nurtured the notion that no culture is more advanced than another and we’re all equal in this big, groovy melting pot called civilization. Promoting fear of Nazis on college campuses seemed like a good idea at first, but when hating white males led to an “ugly war against Israel,” Jews quickly peaced out. Since then, other so-called oppressed minorities have grabbed the PC torch with barbaric enthusiasm and are now willing to set fire to anything that stands in their way, even their own kind.

Chagnon was there during the crossover and seemingly overnight went from a well-respected scientist to an evil Nazi responsible for genocide. “Impassioned accusations of racism, fascism, and Nazism punctuated the frenzied business meeting that night,” writes Chagnon of a talk he and a colleague had in 1976. They were at the American Anthropological Association and wanted to examine how genes affect behavior, but their peers demanded the discussion be shut down. Eventually, AAA head Margaret Mead was forced to point out that these anti-Nazis were acting like Nazis themselves. She likened their behavior to a book burning.

“Anthropology used to be a science just like any other. Today it is a stomping ground for dogmatic lesbians and socialists with no balls.”

The savages then turned on her and proceeded to smear her career by claiming all her research was a hoax. Mead had done some fairly PC work in the past claiming Samoan tribes were OK with adolescent infidelity and that free love can be a natural, beautiful thing. However, defending Chagnon meant she was persona non grata in the Ivory Tower, and a rumor spread that all the test subjects she interviewed were only “joshing.” The 2009 book The Trashing of Margaret Mead may have vindicated her, but the damage these people have done to anthropology and education itself is downright totalitarian.

In the introduction to 1997’s War Before Civilization: The Myth of the Peaceful Savage, University of Illinois Professor Lawrence H. Keeley discusses how anthropologists have “artificially pacified the past.” He explains how easy it is to get grants when your hypothesis involves Rousseau’s “noble savage,” but when you tread near the Hobbesian idea of an innately savage savage, the doors slam shut. One of Chagnon’s most basic observations was that violent tribesmen tended to have more offspring. Women are attracted to tough guys in the safest of environments. This is the jungle. Of course violence pays off. This notion is considered taboo because apparently there’s a risk we won’t want to preserve a tribe if it’s known as violent.

When Changon proponent Howard Bloom said in his book The Lucifer Principle that violence was a natural trait that many groups use to assert themselves, a group of Muslims asserted themselves by threatening to punish him. Bloom was obviously correct, but that didn’t make his ideas any more palatable. Books such as Keeley’s and Bloom’s are exceedingly rare because they contain hatefacts. Keeley talks about Native American mass graves from pre-civilization warfare. We learn of Indians shooting dozens of arrows into a victim after he’s dead so he’ll be incapacitated in the afterlife. We also see a debunking of the myth that the white man taught Indians to scalp. This doesn’t fit the corrupt-white-man narrative and so it has no place in modern academia.

Anthropologists and sociobiologists who discuss innate traits are consistently banished from the tribe. Surely the astonishingly similar lives of identical twins separated at birth shows nature deserves a fighting chance. The Bell Curve is still treated like it was written by the Unabomber, despite Herrnstein and Murray prefacing the book with a sea of disclaimers and careful pleading that although it is possible to make generalizations about a group’s behavior, one must never apply knowledge of these patterns to an individual. (Interestingly, discussing the high IQs of Jews isn’t nearly as taboo.)