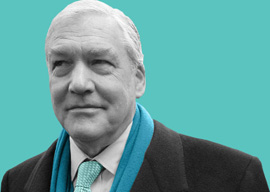 The Lord Black of Crossharbour

Ex-media mogul and ex-con Conrad Black is doing press for his new book A Matter of Principle, and to watch him skewer the biased media who try to corner him is heavenly. I haven’t seen balls like this since Bill Buckley threatened to “plaster” Gore Vidal. When Britain’s Sky News called him a “convicted fraudster,” he told the reporter to “Stop being such a jackass.” When the irritatingly smug BBC repeated the allegation he discussed smashing in the journalist’s face.

He’s like the opposite of Warren Buffett. Where Buffett tells us he has it too easy and has been “coddled long enough,” Lord Black of Crossharbour insists it is he who is doing the coddling and tells a UK audience, “Ninety-nine per cent of the people subjected to the provocations and allegations and false charges and defamations that I have would have responded with a much shorter fuse.”

“We’ve learned to love to hate the rich.”

Black refused to settle out of court and he won’t allow reporters to defame him with any false accusations. Finally we find a “stupid white man” who’s smart enough to see through the jealousy behind that narrative. If someone made it in America, God bless them. That’s good for all of us. As the tattoo on my right arm says, “Luxury employ’d a million of the poor/and odious pride a million more.” That’s right, America, Canada, and Britain: It’s OK to win.

The new Western world is a place where amateurs reign supreme and to be successful is to be guilty of ripping off the losers. It wasn’t always that way. Einstein and Steve Jobs were dropouts. America itself is a European dropout, but Uncle Sam became successful. So did fellow dropout Conrad Black. We seem to have forgotten that part instead of seeing the amateur as a phase on the path to victory.

Because there are a great many more amateurs than pros, the public image of the amateur is that of a fresh-faced, civic minded citizen out to do battle for a cause he believes in, versus the cigar-chomping image of the public professional.

With a modern education that promotes platitudes and discourages dissension, amateurs have never been more numerous. That means it’s a dark time for anyone who happens to have their shit together.

You’d think a country whose values are built on life, liberty, and the pursuit of happiness would be pleased when someone actually pulls it off, but unless he made his fortune entertaining us with movies or music, he’s a pariah.