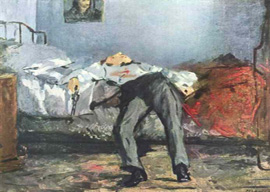 I occasionally visit The Comic’s Comic to keep up with the thimbleful of contemporary comedians I don’t find unfunny or politically indigestible or both.

Right after Boxing Day, the editors announced the suicide of Joe Bodolai, a former SNL writer who’d been found dead in a Los Angeles hotel room.

I’m a Canadian, a comedy geek, and a Kids in the Hall fan since their pre-TV days when they were still playing Toronto clubs. So when I read that Bodolai had produced KITH for the CBC, I felt embarrassed about not knowing his name. I also experienced that pang of nostalgic melancholy brought on by thoughts of some other guy’s mortality and your own.

Along with that brief death notice, The Comic’s Comic reprinted Bodolai’s final blog entry in full. It was titled, “If this were your last day alive what would you do?” The answer was, apparently, write a really long suicide note and post it on the Internet.

Something told me not to read it.

“When you become a virtual parody of someone else–say, a character in The Big Chill–maybe killing yourself is the only option.”

I’m not calibrated for empathy to begin with, but whatever affinity I felt toward Bodolai seeped away when confronted with his anti-Semitic, 9/11 “truther,” “fascist” “FEMA camp” paranoia—all of which he saw fit to place at the top of his final message to the world.

Few individuals have the power to raise my blood pressure like “truthers.” If you really believe 9/11 was an inside job, then you’re obliged to either assassinate those responsible or kill yourself in abject despair. And if, like Bodolai, you sincerely think that “Fascism will be America. It already is,” then either you leave the country on the next flight and burn your passport upon arrival, or you’re only a pretentious poseur and a barroom bore.

I don’t expect a man’s suicide note to sound sane. And it’s no shock when any professional comedian reveals himself to be damaged to some degree, “tears of a clown” style.

Some might even quip that anyone who worked in show business as long as Bodolai could be forgiven his anti-Semitism, although while the Jews may indeed own Hollywood on paper, they’re no longer in charge of the day-to-day operations. The gays and their menopausal fag hags took those over at least ten years ago. (Steven Spielberg summed up this transition when he told another insider around 2003 that “he had decided to hire only gay men” in the future because they “think out of both the left and right sides of their brain.”)