Anything Goes No More 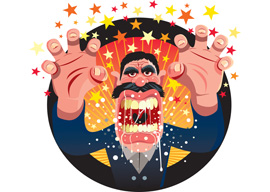 Teen pop star Miley Cyrus is in the news again. I think she bared her torso or the side of her breast or picked up a Playboy or something. How shocking! How did we get here?

Back in the 70s, a ten-year-old Brooke Shields appeared dolled-up and naked and it was considered high art. Today the Tate Modern gallery is told that featuring even a photograph of that photograph violates obscenity laws.

When Rush Limbaugh implied that Sandra Fluke fit the definition of a slut, both sides of the political spectrum were up in arms. Some were disgusted by the word because it’s sexist and others were outraged because it’s a swear word. I was particularly annoyed by the right’s indignation. Conservative friends of mine here in New York said they were very disappointed in Rush for “stooping to their level.” One of them even said it “went beyond the realm of civil discourse.”

“She’s at a Catholic school!” I yelled like Charlton Heston when the apes first captured him. “In that context, she’s the very definition of a “slut”!” I was dismayed because I felt like the PC virus had crept into our world.

“The PC movement of the 1990s is a dangerous virus that has disabled the body politic.”

The only common ground our culture shares these days is that everyone’s a prude. One side is sexually prudish and the other side is culturally uptight.

You used to be able to talk like that. In 1971, Archie Bunker told Meathead, “I never said a guy who wears glasses is a queer. A guy who wears glasses is a four-eyes; a guy who’s a fag is a queer.” Later in that episode he said, “England is a fag country,” and the audience exploded with laughter. But last year when Brett Ratner quipped, “Rehearsals are for fags,” the audience gasped in horror and Ratner was forced to tour the country begging other audiences to forgive him.

When the baby boomers were in their 20s, Weezy discovered George Jefferson had blown $350 on a watch. She put her hands on her hips and exclaimed, “Nigger, please!” The audience was in hysterics. Thirty-seven years later, that word has become so unthinkable, we only pronounce the first letter. In today’s America, it’s racist to feature a commercial with a monkey in it if an African American was on TV earlier. Shit, the term “kitchen cabinet“ is now considered racist.

One side wants bikinis banned while the other side insists we get rid of high heels. It seems like the only thing that’s still allowed is pooping on the party. Liberals went from Free Love and jokes about the clap to stamping their feet and yelling, “No means no!” while leading lynch mobs against people who call women sluts.