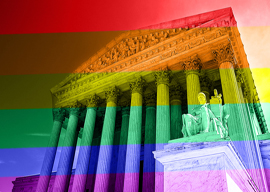 “The US needs street fighters like Donald Trump at every level of government because the liberal fascists Dems are playing for keeps.”

So tweeted the son and namesake of the founder of the Moral Majority, and he has here a self-evident point.

Thursday, 11 GOP senators on the judiciary committee freely forfeited to a female prosecutor their right to cross-examine Christine Blasey Ford, the accuser of Judge Brett Kavanaugh.

The Republicans feared that televised images of 11 white men, sharply questioning the credibility of Ford’s claim to be a victim of Kavanaugh’s sexual assault, would be politically lethal.

So, while the Republicans mutely abstained from challenging her, Ford was treated by the Democrats as the reincarnation of Joan of Arc, though not a single witness has corroborated her story.

Friday, Sen. Jeff Flake caved to Democratic demands for another weeklong FBI investigation of the judge. The Republicans, egg visible on their faces, endorsed their colleague’s capitulation.

Thursday, Sen. Lindsey Graham had been the Republican lion of the hearing, indicting Democrats for the moral atrocity they had deceitfully and dishonorably perpetrated against the judge.

By Friday, our Cicero was reaching out in collegiality to the same senators he was castigating 24 hours before.

“Since World War II, the court has de-Christianized all public schools and the public life of a land Woodrow Wilson and Harry Truman called a “Christian nation.” It has established secularism as our state religion.”

Falwell’s point: Democrats fight savagely and for keeps, while Republicans — street-fighter Trump excepted — are wimps, often bewailing any loss of camaraderie with their colleagues across the aisle.

As my late friend Sam Francis said in the title of his book, many Republicans are perfectly content with being “Beautiful Losers.”

Yet the stakes here are immense. Consider how the Supreme Court has remade the America we grew up in.

Since World War II, the court has de-Christianized all public schools and the public life of a land Woodrow Wilson and Harry Truman called a “Christian nation.” It has established secularism as our state religion.

Despite civil right laws declaring race discrimination illegal, the court has given its blessing to affirmative action, deliberate discrimination in favor of peoples of color against white men in the name of diversity and equality.

The court has declared that what were once crimes, abortion and homosexuality, are now constitutional rights all Americans must respect.

These changes were not legislated democratically, but imposed dictatorially by the high court. While a Senate confirmation of Kavanaugh would not reverse these mandated changes, it might halt any further imposition of this radical social revolution by unelected judges.

But while the Democratic left, understanding the stakes, is fighting bare-fisted, Republicans are sparring with 14-ounce gloves and seeking to observe Marquess of Queensberry Rules.

In other ways as well America has been remade.

Not only has Christianity, and all its symbols and expressions of faith and belief, been removed, but also a purge is underway of monuments and statues of the explorers, colonists and statesmen who, believing in the superiority of their religion, culture and civilization, set out to create the county we inherited.

And William Frey, resident demographer at the Brookings Institution, writes about how America is being changed — without the consent of the people.

Since 2000, the white population under the age of 18 has shrunk by seven million, and declines are projected among white 20-somethings and 30-somethings over the next two decades and beyond. This is … a trend that is not likely to change despite Mr. Trump’s wish for more immigrants from Norway.

The likely source of future gains among the nation’s population of children, teenagers and young working adults is minorities — Hispanics, Asians, blacks and others.

When we are all minorities, and all behave as minorities, making our separate demands upon the country, what then holds America together?

Providence has been pleased to give this one connected country to one united people — a people descended from the same ancestors, speaking the same language, professing the same religion … very similar in their manners and customs…

This country and this people seem to have been made for each other, and it appears as if it was the design of Providence, that an inheritance so proper and convenient for a band of brethren, united to each other by the strongest ties, should never be split into a number of unsocial, jealous, and alien sovereignties.

Yet, each decade, less and less are we descended from the same ancestors. Less and less do we speak the same language, profess the same religion, share the same manners, customs, traditions, history, heroes and holidays.

Does America look today like the “band of brethren united to each other” of which Jay wrote, and we seemed to be as late as 1960?

Or does not the acrimony attendant to the nomination of Judge Kavanaugh suggest that we have already become a land “split into a number of unsocial, jealous and alien sovereignties.”

With all our new diversity, whatever became of our unity?