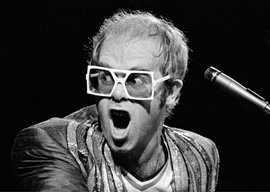 A global scandal erupted last week after someone complained about the manner in which a grocery store in Mountain Home, Arkansas was displaying an Us Weekly cover featuring sextuagenarian songbird Elton John, his widow-peaked “partner” of 17 years David Furnish, and their month-old bioengineered son Zachary Jackson Levon Furnish-John”who may or may not be gay, nor, as far as I can tell from that cover photo, even alive.

After spotting the magazine on display at a Harps regional grocery-chain outlet, a local Arkansas native Tweeted that she was “shocked” and “horrified” at what she”d seen and publicly inquired whether anything could possibly be done to rectify this clearly unacceptable and morally abhorrent situation.

The story soon went viral, along with the sad, predictably uptight bleatings of pharisaical outrage among faceless, small-minded commenters:

Many of the comments crossed the line from simple moral indignation to violent threats and outright hate speech:

“This makes me very, very stabby…die off…move to a big fucking island somewhere and leave us…alone!!!!…people like you should just spontaneously combust for the sake of our society…you should be eradicated…you should be like, beaten up and raped…seriously go kill yourself.”

Kindly note that all those unhinged and morally totalitarian quotes were from gay-rights supporters, not gay-bashers.

The sequence of events at Harps Marketplace way up in the Arkansas Ozarks went roughly like this: The magazine featuring the gay duo and their possibly gay baby was put on the racks. According to store management, “several” customers complained about it. The manager, following standard protocol when customers complain, decided to put up what is known as a “Family Shield“ covering most of the magazine in order to “protect young Harps shoppers.”

It was the Family Shield”not the in-your-face-and-down-your-throat gayness”that “shocked” and “horrified” local woman Jennifer Huddleston, who, at the risk of stereotyping, looks like a typical fag hag who owns a lot of cats.

The gay-friendly Huddleston decided to get TWICE as offended as the anonymous local homophobes. She hopped onto Twitter beseeching the help of the ACLU, GLAAD, Anderson Cooper, Ellen DeGeneres, the shrieking orange cunt-monster Kathy Griffin, and the rest of the gay-friendly digital world, which came out in force to prove that they were far more technologically efficient at getting offended than a smattering of fundamentalist queer-baiters in the Arkansas hills.

“It seemed normal for Elton to be weird; what seems so weird are his half-cocked and possibly senile attempts to be normal.”

It was during this furious and well-orchestrated backlash that we got a glimpse at how truly tolerant and accepting the gay coastal urban blogosphere is toward those whom they perceive as fundamentally “different” from them:

Bible thumping inbreds…bible beating mouth breathers…fuckin rednecks….They can’t live in a world where people are different…its fucking ignorant white trash hicks like you that make this country so fucked up…white trash baby mommas with no baby daddy in sight who live on Hi-C and Doritos, smoke no-name brand cigarettes and scream at their kids 24/7….The SCARIEST part is that these midwestern YOKELS have the same voting rights we do. There must be so much METH in the air they breath [sic]…uneducated, idiotic, hate-mongering, ignorant…backwards ass hillbilly fuckholes….truly dumbfuck, missing tooth people….They would give their only tooth to fuck Elton….Yes the south is the butt of so many jokes because they have all taken one dip too many in the same gene pool.

The story was picked up by ABC, NBC, and CNN. It soon found its way into the UK’s Daily Mail, the India Times, and the Sydney Morning Herald. The international press made blanket headline statements about how the magazine was “Censored In US” or “Censored in Arkansas,” as if what happened was more far-reaching and culture-damning than a single incident at a single store in a single small American town.

Within a day, Harps executives relented to media pressure, removed the Family Shield, and issued a groveling apology about how “our employees and our customers come in all shapes and sizes, beliefs and preferences….Harps has never and would never discriminate.” With triumphalist jubilation, major media declared that one brave girl had “shamed” a backwoods grocery store into removing the odious Hate Shield.

I remember back when public shaming was largely aimed at the homos. Nowadays it’s the homos and their sob sisters who are eagerly doing most of the “outing” and public shaming. Either way, I”ll pass.

After decades of insisting that the government get out of their bedrooms, gay activists are now insisting on their natural-born right, even if they have to hop in bed with the government to accomplish it, to drag their cum-spackled waterbeds straight into small grocery stores in rural areas where the majority of people might not want their four-year-olds to see it.

Not that anyone asked, but I preferred gay males when they were cultural outsiders who seemed impossible to offend. Nowadays they scream for mainstream acceptance and get offended at everything. Tsk-tsk, ladies! As outsiders, they used to see clearly through the idiocy of mass-culture moral panics. Now, as they squiggle and squirm to be accepted as “normal” rather than “different,” they fabricate their own humorless moral panics. Frankly, the fags have disappointed me. If they keep up this pace, it will soon be impossible to distinguish them from the lesbians.