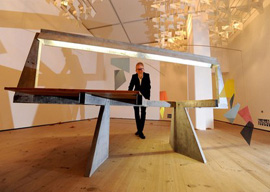 Right as fashion photographer Mario Testino was about to announce the winner of this year’s coveted Turner Prize, a beefy brute in a pink tutu and sensible black socks materialized from nowhere and launched himself into a graceful belly flop on the stage.

As the black-clad forces of artistic order pounced on the intruder and frog-marched him out of the gallery, Testino pressed his pale lips into a smile: “And the winner is—Martin Boyce!”

The Northern Echo later reported that the tutu man had the words “STUDY THIS” written in marker around his navel. For lack of anything more serious, they nicked him “on suspicion of disorderly conduct.”

Since its beginnings in 1984, the Turner Prize has become an institution, a cultural event as loved and respected as the Eurovision Song Contest. But after years of quality entertainment, it may have finally jumped the shark. Martin Boyce proved to be anticlimactic in more ways than one. A funny little man with the air of a stamp-collecting milkman, Boyce had little to say about his work, instead only taking the opportunity to thank his “mum and dad, brilliant wife, and gorgeous children.”

“They’ll lecture us philistines about what art really is, knowing all the while that every work they create, every essay they write, is a juicy hocker spat in art’s face.”

The critics couldn’t find the words for it either, though a lady at the Guardian found it “quietly atmospheric” and “lyrically autumnal.” Quiet it certainly was, since the installation consisted of little more than a rubbish bin set in a large white room.

It’s been a difficult decade for the Sham Art movement in Britain. Since the chairman of the Institute for Contemporary Art broke ranks and called Conceptual Art “pretentious, self-indulgent craftless tat,” since Damien Hirst was outed as a serial plagiarist, a lot of the glitter has worn off the brave new world of the Young British Artists.

Even Charles Saatchi, the ad man whose millions did so much to pump up the Sham Art boom, recently told the Guardian that he finds the contemporary art world “comprehensively and indisputably vulgar….It is the sport of the Eurotrashy, hedgefundy, Hamptonites; of trendy oligarchs and oiligarchs; and of art dealers with masturbatory levels of self-regard.”

He ought to know. Meanwhile, we have learned that the tutu streaker’s name is Mark Roberts, and he isn’t exactly new to this line of work. This was his 505th streak, and he considers it his career’s pinnacle. “I’m an artiste,” he told reporters. “What I do is part street art, performance art, and contemporary art.”

Rogue intellectual elites’ power plays make up one of modern history’s creepier themes. It was George Orwell who first caught on to the game. Like the Bolsheviks, 1984’s Inner Party was an elite that discovered it could manipulate opinion enough to gain total control of society—control which it would never relinquish. Underneath the Newspeak it was never about ideas or ideals, never about anything but power.