Aryan Psycho Killers and Me 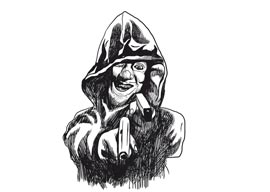 The horrific mass shooting in a Charleston church is bringing out the best in all of us. I might be using the word “best” incorrectly. Left-wing pundits are blaming conservatives and white people in general. Conservatives are predictably tongue-tied and clumsy, longing for the days when Rachel Dolezal dominated the headlines. Bill Maher is blaming Fox News and everyone in the media except him. And conspiracy loons are, naturally, screaming “false flag,” because of course there was no gunman, no murders, no church…hell, it turns out there’s not even a Charleston.

Logic always goes out the window during these periods of finger-pointing, as we struggle to explain the monsters among us. Again and again, we ask a question that is by and large unanswerable: How can we prevent these kinds of things from happening? Of course, the only honest answer is, we can”t. Can you name one single negative human trait that has ever been bred or taught out of existence in human history? Just one. Of course you can”t. There will always be people who are violent, angry, vengeful, psychotic, bitter, envious, and racist. So the inevitable follow-up question is, can we at least spot mass murderers in advance? Sometimes, sometimes not. Let me illustrate this dilemma with two examples from my past.

“Logic always goes out the window during these periods of finger-pointing, as we struggle to explain the monsters among us.”

In 1993, “Aryan warrior” Jonathan Haynes went on a cross-country killing spree. And while he was killing folks, he was leaving phone messages for me. I”ll let the Illinois state’s attorney sum up Haynes” crimes:

Jonathan Haynes is a Nazi. Acting on his Nazi philosophy, he plotted to kill people whom he viewed as threatening the purity of the “Aryan” race. The people defendant targeted were chosen because their professions, in defendant’s view, all involved them taking actions by which persons who did not look “Aryan” could alter their appearance so that they could look “Aryan.”

That’s Haynes in a nutshell. He was obsessed with “Aryan beauty,” and he decided to kill anyone who gave non-Aryan’s “Aryan-like features” (hairdressers, plastic surgeons, purveyors of colored contact lenses, etc.). Holocaust denier Bradley Smith had given Haynes my voicemail number (what a pal). Haynes impressed him because he worked for the ATF, and how could someone with such impressive credentials be violent or insane? Throughout the first half of 1993, I started getting voicemail messages from him. I had no idea who he was, but he threw up so many red flags, I saved the messages. I had no way to know that in 1997, the following would be used as evidence in a capital murder case:

I find it ironic that I’m forced to read Semites to develop an anti-Semitic position. Gentiles, sometimes they’re not accurate as…uh, well…I’VE GOT A RIGHT TO LIVE! Let me get to the point. I see a lot of black men going out with white women. I see movies like Guess Who’s Coming to Dinner and I see who’s behind it, and it doesn’t make me comfortable. Uh, uh, uh, uh, I look at the people who’s producing that type of movie in Hollywood. Guess Who’s Coming to Dinner, Jungle Fever, etcetera, ad nauseam, and I meditate on my own position. I DON’T THINK I’M A WORTHLESS PERSON! I DON’T THINK I DON’T DESERVE A WIFE. I THINK I’M A WORTHWHILE PERSON AND I THINK I DO DESERVE A WIFE! And if I can’t get a wife, I’m gonna get angry and I’M GONNA LOOK FOR THE CAUSE OF WHY I CAN’T GET A WIFE. Why all these white women are going out with black men, I’m gonna look at the cause and I’m gonna try to eliminate them.

The Jews think that Aryans destroyed a third of their race and yet for some reason they think that Aryans are very attractive sexually. Star in their pornographic films, not that I’m against that. It’s fun to celebrate beauty, so I don’t condemn you on that score. I’m gonna search out the factors that deny me a wife, and I’m gonna deal with them. I don’t want to give you my phone number because I live with Asians. Asians have always come across to me as hardworking honest people and some of their women, in fact, are quite beautiful, and I don’t want to give you my work phone number for fear of what you might do with it. It’s gonna have to be a one-way communication, but at some later date we can talk again. I’ve tried to discuss this subject with Jews before and I must admit I was the first to start shouting. I’m not willing to stand on a street corner and let people blow me away. I feel like I’m in that position to my enemies. Either they’re gonna blow me away, or I”m gonna blow them away.

Haynes is currently on death row in Illinois. I had called it correctly: He seemed like a psycho, he was a psycho. Look at me! I”m a master profiler! Except…cut to 2011. A friend and enthusiastic participant in my Republican Party Animals organization had been corresponding online with a man named Anders Breivik, a Norwegian with strong anti-immigration and anti-Muslim feelings. My friend posted some of Breivik’s emails in my private Facebook group. I”ll be honest”the guy didn”t throw up a single red flag. As far as “anti-jihadists” go, he came across as much saner than Pam Geller or Debbie Schlussel. An example:

I”ve devoted much of my book to tackling the root cause of Islamisation, namely multiculturalism/cultural communism. Europe has always been based on a Judeo-Christian culture and it’s essential that we continue to fight for that. In that regard, it’s positive to witness how the “old school nationalists” all around Europe are conforming by rejecting the old racist and anti-Jewish views. The new Conservatist “new right” is rapidly developing into a pro-Israel, anti-Jihad alliance.