As Goes the Holocaust, So Goes the West 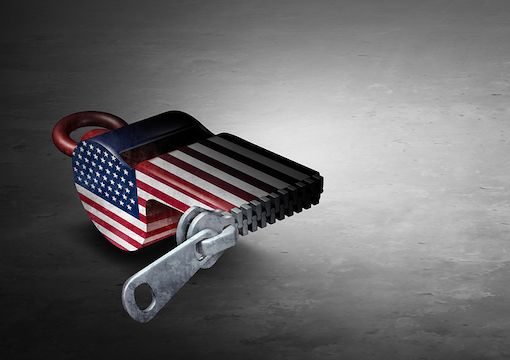 When did we become so deathly afraid of speech? And why is it oddly appropriate that the recent 75th anniversary of the liberation of Auschwitz coincides with ramped-up efforts to curb free-speech rights in the U.S.?

Let’s use a fake Indian as a scout to begin our journey toward the answer.

Last week, Elizabeth Warren announced a “plan of action” to curb “digital disinformation.” The plan features “civil and criminal penalties” for “knowingly disseminating” content that “has the explicit purpose of undermining the basic right to vote.” Any speech that might “depress voter turnout” would be criminalized.

Warren’s plan follows months of drumbeating by mainstream journalists in the service of criminalizing political speech. “Why America Needs a Hate Speech Law” was the title of an October WaPo piece by Richard Stengel, an Obama administration official–turned–editor of Time magazine. Similar essays have appeared in dozens of mainstream media organs (including Bloomberg). A December Vox survey found that the majority of Democrat presidential candidates favor criminalizing or otherwise suppressing speech that’s deemed “hateful” or “false.”

Warren, though, is the first Democrat to codify those proscriptions into a proposed law, one she’s pledged to pursue as president.

So where does the Holocaust come in? Well, most of Europe’s hate-speech laws were initially crafted to imprison Holocaust revisionists and deniers. In Canada, the government’s recently announced regulation of “fake news” has its roots in the “false news” laws that were used in the ’80s to prosecute revisionists and deniers. And here in the U.S., Warren’s and Stengel’s proposed laws evolved from the 1988 Hofstra Law School “model statute” drafted to criminalize hateful and false speech (the statute, discussed in greater detail here, was tested in moot court against a hypothetical Holocaust denier).

Indeed, the Holocaust serves as the spark for the spirit as well as the letter of modern-day speech criminalization laws. Would-be censors, left and right alike, have always feared speech. But it was the fear of what “too much speech” would do to Holocaust history, and how it could harm the feelings of Holocaust survivors, that prompted the codification of anti-speech paranoia into today’s legal statutes. Arguing in favor of Warren’s curbs on speech, congressional Punjabi (and affirmative-action asterisk law professor) Ro Khanna tweeted, “Falsity has never been part of our 1st Amendment tradition.” In fact, that’s 100% ass backwards; James Madison specifically stated that the “misuse” of speech is an inevitable and tolerable aspect of our First Amendment rights.

“You can’t overcome the Western tradition of free speech and open debate overnight.”

If Khanna had an ounce of honesty coursing through his curry-caked arteries, he’d admit that the current war against speech “falsity” originated not with our Founders, but with Jews arguing that “false speech” endangers the memory of the Holocaust and pours salt on the wounds of survivors. We forget the Holocaustian origins of European, Canadian, and (proposed) American anti-speech laws, because these days those laws have metastasized to include protections for every nonwhite non-Christian non-straight non-male “victim group.” But go back to the roots of those laws, and you’ll find Jews humbly beseeching gentile society to curb just a little speech, just for them.

There’s an irony from my youth—the “heyday” of Holocaust revisionism—that I’m only now able to fully appreciate. The way that revisionists responded to Holocaust anti-speech laws inadvertently assisted in their expansion. We would scoff, “Typical Jews—demanding special protection for their interests, acting like only their suffering matters and only their feelings deserve coddling under cover of law.”

We fell into a finely laid trap. Yes, the plan was to make people look at the laws that protected Holocaust history from “false news” and Holocaust survivors from “offensive speech” and say, “Fuckin’ Jews, why do only they get such special consideration? Why not other people who’ve suffered?”

Exactly what the speech suppressors wanted us to say.

Those anti-revisionist laws were a trial balloon, a “phase one.” You can’t overcome the Western tradition of free speech and open debate overnight. You start by establishing acceptance of censorship regarding an issue that’s on most people’s periphery. Something distant from and unimportant to their daily lives. The laws that criminalized Holocaust revisionism and denial affected a ridiculously small number of people. That was the point. Folks got used to the presence of those laws while not being touched by them personally. As Westerners grew comfortable with the notion that yes, Holocaust survivors should be shielded from speech that offends, and yes, the history of the Holocaust is strengthened by restrictions on how it can be debated and discussed, it became easier and easier to expand those “special protections” in more invasive ways.

Whites became accustomed to the idea that some things fall outside the realm of free speech and open debate, and nonwhites (and other assorted “victims”) began clamoring to have their causes and feelings added to the list of things about which one must never speak ill. The Holocaust laws primed the public for the eventual expansion of protected topics and peoples. They were a point of entry for leftists (Jews and non-Jews alike) who understood the value of speech restrictions, and the necessity of them, in the fight to dismantle the traditional West. Like Bontshe the Silent reluctantly asking the angels for a hot roll and schmear of butter, it started with humble old Jews, their hands outstretched, weepily entreating, “Just censor a little speech in this one particular instance,” and it led to where we are today. “Bad speech threatens Holocaust history” has become “Bad speech threatens democracy itself.” “Just censor Holocaust skeptics because their words offend weak old survivors who deserve to live out their final years in peace” has become “Censor all facts about basic biology because mentally ill men in dresses might get upset.”

All current attempts to stifle speech in the name of protecting feelings, and all current scare campaigns about how unregulated speech inevitably leads to bad and destructive outcomes, owe their existence to the acceptance by Western whites of a set of “special circumstances” whereby traditional notions of “fight speech with more speech” and “let truth and falsehood battle it out” and “sticks and stones may break my bones but words’ll never hurt me” don’t apply to Holocaust history and Holocaust survivors.

Back in the early ’90s when I was mouthing off about how you can’t gas people in rooms where the doors lock from the inside, or where the doors open into the room, or where there are plate glass windows in the wall, I was routinely told by non-Jews who had no emotional connection to the Holocaust, “Look, maybe what you’re saying is true, but why say it? Why cause such pain to the poor survivors?” More often than not, my work was banned and censored by people who, though not personally offended by it, nevertheless felt compelled to uphold the “special circumstance” protections granted to Holocaust-related speech.

Back then, a small number of people understood that, in fact, unregulated speech actually made Holocaust history better, sounder. Christopher Hitchens, the New York Post’s Eric Breindel, and seminal Holocaust historian Raul Hilberg all conceded that the challenges posed by Holocaust revisionists and even outright deniers actually forced mainstream Holocaust historians to be better at their job; that being confronted with criticism and opposing theories compels historians to bolster their theses (to be fair, Hilberg only admitted this under cross-examination during the trial of denier Ernst Zundel in Toronto in 1985).

But Hitchens, Breindel, and Hilberg are dead now, as is the simple understanding that truth is only strengthened by having to compete with falsehood.

For anyone in the present day who’s been “canceled” for stating a fact or making a simple commonsense observation, well, welcome to the world of my youth. Don’t forget that mainstream conservatives allied with liberals when it came to “protecting” Holocaust history from the reasonable observations of revisionists like me. And now conservatives bitch that they get banned from social media for making factual observations like “There are only two genders.” Too bad. Your Holocaust “special circumstances” are claimed by trannies now. And blacks. And “immigrants.” And everyone else with an ax to grind against Western civ. Shoulda killed that beast in utero thirty years ago. By acquiescing to what was done to revisionists back then, you guys paved the path to where we all are now.

One additional point: The more dangerous it became back in the ’90s to challenge Holocaust orthodoxy, the more the revisionist side of the debate fell to the extremists. The penalties and punishments chased away everyone with a career or a reputation to preserve. What remained were the nuts, the brawlers who welcomed the fight and enjoyed being branded as Nazis. Since at least the early 2000s, rational Holocaust revisionism has fallen to the irrational deniers, dimwit extremist ideologues who have no interest in historical research and documentation. They just want to “fight the Jews.” The fight, not the historiography, is what appeals to them.

Another irony, this one totally predictable: As rational revisionists were attacked and chased away as Nazis, the field was ceded to actual Nazis.

This is the end result of speech criminalization. Rational voices go silent, because rational people—capable as they are of weighing actions and consequences—do the math and realize that it’s more prudent to pull back and shut up, when speaking freely might cost them their livelihood or freedom. What happened with Holocaust history will soon happen with topics like male/female biology and IQ inheritability. Anyone with anything to lose will think twice before challenging the left’s orthodoxy on those topics. That’s what speech penalties do; they scare away exactly the people with the intellectual capacity to best make the case that the penalizers don’t want made. And once a field is abandoned to crackpots who spout nonsense, the public becomes even more welcoming of speech proscriptions, due to the general loathsomeness of those being silenced.

Thirty years ago, sane people had a chance to stop the madness. But they allowed themselves to be emotionally blackmailed into accepting the belief that in “certain circumstances” free speech and open debate are harmful and should be curbed. They assumed that those circumstances would remain special. They’re now the norm.

You got played, folks. And like any gullible mark who falls prey to a sob story in the service of a long con, in the end you have nobody to blame but yourselves.