At a Loss for Words 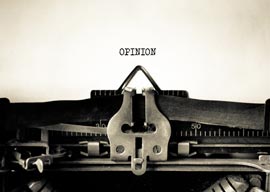 It’s official”words no longer have meaning.

As a proud member of society’s educated, progressive elite, I”m thrilled. Since Bill Clinton famously disputed the definition of the singular third-person present form of the verb “to be,” many of us have looked forward to a time when all words would be rendered completely meaningless. Thanks to Chief Justice John Roberts and his recent King v. Burwell ruling, that dream has finally been realized.

See, for too long we have allowed “words” and their “meanings” to obstruct us on our quest for social justice. The long, slow march to the Utopia of American Socialism will never end if we have to rely on “words.” There are simply too many of them and they all mean different things. That’s why this decision is so powerful”the “words” are still there, but they no longer “mean” anything beyond what we want them to mean.

“Just imagine what we can accomplish if we strip the meanings from all words we find inconvenient.”

It now no longer matters that the Affordable Care Act clearly stated that those redistributive insurance subsidies only apply to purchases made on state-run exchanges, a point readily acknowledged by SCOTUS care architect and social-justice Ãbermensch Jon Gruber. We couldn”t change the words that make up the text of the law. But we could change the meanings of those words, and thereby manipulate the meaning of the law for our own ends.

Incredibly, the Supreme Court of the United States totally agreed! By this ruling, “state” now means “state or federal government.” It might just as easily mean “tyrannical Oligarchy,” or “league of asexual little people.” In fact, “state” can mean whatever we need it to mean at any given time. The implementation of American law is now akin to a game of Constitutional Mad Libs.

But why stop there? Just imagine what we can accomplish if we strip the meanings from all words we find inconvenient. Indignant that your Christian bakers refused to cater your gay wedding? Sue them for “mental rape,” and then have your judge redefine “freedom of speech“ to forbid them from speaking out about it. Worried that your local housing authority is secretly pursuing “racist” policies? Redefine “statistical anomaly” to mean “racism” and voilÃ , you”ve got a “disparate impact“ ruling. Have a neighbor you believe harbors antiprogressive sentiment? No problem”just redefine “Hate Crime” to mean “Thought Crime” and with any luck, you”ll soon be able to have him or her shipped off to a state or federal government reeducation camp.