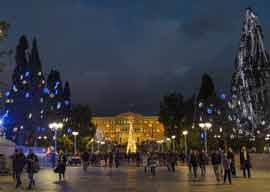 Athens—Viewed from Mars, this is a sunny, peaceful city. Up close, however, things ain’t what they used to be. First, those wonderful Greek smiles are gone, replaced by wintry ones at best. People are worried, as well they should be. At the Divani Caravel hotel, once owned by yours truly, the staff greets me like a conquering hero. I was a benevolent owner who used to party and spread the wealth. Now things are more professional, and the hotel is profitable because of expert management. The staff is the best in Athens by far.

The migrant crisis is secondary, from what I hear. Pension reform and the country’s creditors are on a collision course, with daily strikes impeding any growth to an economy that’s hit rock bottom. It will get worse, as it is an intractable gridlock. How can an economy grow and pay its debts when austerity is squeezing it python-like? For “python,” read Angela Merkel-like. This woman (bitch), who has stated that “the right to political asylum has no limits on the number of asylum seekers,” should obviously be shot without a blindfold, the trouble being no one shoots women any longer except for ISIS and their ilk. Slovakia and Hungary have been wise to tell economic migrants and the EU to shove it, but poor Greece is on the front line, as is Italy. No one expects Turkey not to undermine Greece, just as no one can count on Libya to spare Italy.

“We used to raise so much hell and at times felt we owned the place.”

I flew into Athens for two concerts by Israel’s national orchestra conducted by the great Zubin Mehta. Sponsored by my oldest friend, Aleko Goulandris, I had the opportunity to study the maestro from up close, dining and lunching with him, with a private rendition from The Barber of Seville by the great soprano Christina Poulitsi, a young woman who will go very far in the opera world. The maestro had studied with Dimitri Mitropoulos when he was a youngster—we are exactly the same age—and told me how the Greek would point at a score and ask him to pick any page and Dimitri would know it by heart. Zubin also conducts without score, and his Ravel suite from the ballet Daphnis et Chloé brought down the house. He also gave us Mozart, Tchaikovsky, von Weber, Rossini, and Saint-Saëns. His wife, Nancy Kovack, was a very beautiful Hollywood actress back in the early ’60s, and she and I pulled the maestro’s leg about our dates—innocent ones, alas, at El Morocco. Ah, those were the days.

But back to Athens. I left for good in 1994. I owned three houses and lots of land on the island of Zante. Most of them are now gone, sold, but I still have property in the Peloponnese. I knew everyone there was to know, and then some, and have kept all the friends who are still kicking. Hence it hurts when I see them as I now spend my time in New York and in the Alps. We used to raise so much hell and at times felt we owned the place. Representing Greece in a couple of sports helped. Even cops used to turn a blind eye to some of our shenanigans. Athenian life was slow and sweet, sunny and full of charm. No one worried about tomorrow. There was never a frenzied rush for anything; most of the time I was in a slow haze, dreaming of some Grecian maiden I had spotted in Kolonaki Square.

The memories remain. The only good thing about austerity is that no old buildings have been knocked down. Things have just got grubbier. I sat at the concerts with the Greek royal family, including King Constantine’s sister, Queen Sofia of Spain. The king has written his memoirs, or how things really were, finally telling his side of the story. Excerpts from the book tripled the circulation of the newspapers that carried them. The book is being translated into English, and here is what I have to propose: King Constantine has agreed for me to find an English and American publisher for him. I think that I should be contacted through this website, as time is not of the essence. No one has a more interesting story. King at 24 and married to the most beautiful princess in Europe, a coup maker against the colonels on Dec. 13, 1967, exiled after its failure, yet denied by opportunistic and lying politicians of his role as the first man to stand up to the military. And what a life he’s had despite that major setback. As a young crown prince he stayed with Eisenhower and de Gaulle, knew the Kennedys and LBJ from up close, and knew every mover and shaker of his day, as they say.

Now it’s back to Gstaad on a very small airplane that goes very fast.