Atlas Shrugged: A Hymn to the Overdog 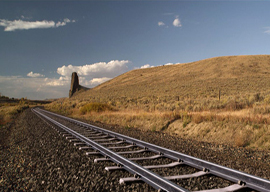 Atlas Shrugged: Part I is the most universally despised movie of 2011, but I liked it. Critics hate this adaptation of Ayn Rand’s 1957 cult novel for predictable ideological reasons, while Randites are embarrassed that their exalted capitalist system failed to pony up the munificent financing necessary to give Rand’s doorstop novel the blockbuster treatment they feel it deserves.

Instead of Angelina Jolie as heroine Dagny Taggart (as was rumored in 2008), this adaptation stars Taylor Schilling and other TV types. The film was rushed into principal photography on June 13, 2010, just two days before producer John Aglialoro’s 18-year option ran out.

I”ve never read Rand’s novel about a dystopian near-future in which the unappreciated capitalists who keep the world running go on strike. And from what my wife tells me of her attempt to grind through the book in college, it sounds pretty dire: “Rand lauds the competent, but she herself wasn”t a competent novelist.” Thus, I walked into the theater with negligible expectations, wondering whether it would be ethical to walk out early and still review it.

“Rand is famous for being anti-government, so it’s intriguing to see how much she despised corporate oligarchs equipped merely with deft lobbyists.”

To my surprise, I quite enjoyed Atlas Shrugged. Although the story is a hymn to the overdog, this low-budget movie has underdog appeal. I soon started to root for the plucky filmmakers to pull off their high-wire act of making a movie that’s distinctive”not distinguished, but still very 1957 in texture”without having anywhere near enough of the dollars that Rand idolized.

Have you noticed how few prestige movies these days are shot in midsummer when scenery is at its best? For example, the Coen Brothers” True Grit was a fine film, but it would have looked much less gloomy if filmed in June. Movie people like to send audiences the message: “You can tell by the dreary weather that we didn”t hire cheap television talent during their summer hiatus.” Well, Atlas Shrugged could only afford TV people on summer break, and guess what? The scenes of Dagny’s new super-train roaring through the sunny Rocky Mountains at 250 MPH are glorious.

Atlas Shrugged: Part I is nominally set in 2016, but the story is a pastiche of mid-twentieth-century concerns. Unfortunately, little in the movie will make much sense to the viewer who doesn”t possess at least a passing familiarity with some now mostly forgotten American economic history. If you do, Rand’s humorless plot still won”t seem terribly logical, but at least you can see where she’s coming from.

The America of 2016 is in a 1930s-style depression, both economic and moral. As during the first two years of the New Deal, when Franklin Roosevelt borrowed Mussolini’s corporatist economics, government and business conspire to reduce the “over-competition” blamed for the downturn. Established moguls ostracize entrepreneurs.