Attack of the Elites 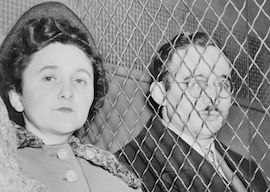 It’s Indian summertime and the living is easy. There hasn’t been a cloud above the Bagel for two weeks, the temperature is perfect, the noise of cement mixers and construction everywhere is unbearable, and there is gridlock while the world’s greatest freeloaders are in town for the U.N. annual. Despite the great weather, the place feels joyless, the media full of dire warnings about safe spaces and racism. There’s something very wrong here. Pessimism rules an anxious, depressed, and angry people. Well, I’d be depressed too if I took American media and its pundits seriously.

And speaking of depressed and angry buffoons, a half-wit called Krugman who writes for The New York Times has just announced that close to 70 million Americans are foreign agents. I kid you not. The hysterical moron has a column and wrote “[The GOP] has effectively become part of a cross-national coalition of authoritarian white nationalists…but at this point they’ve pretty much crossed the line into being foreign agents.” Poor old Krugman, someone with a heart should take him upstate and put him in a barrel and send him over Niagara Falls. He’d be doing Krug the crock a favor.

Mind you, the establishment has subverted Brexit over where you are, and is subverting the presidency over where I am. I am having fun discussing Brexit with American friends. There’s an antidemocratic coup taking place in London by the sellouts, I tell them, a smug, self-righteous so-called establishment—you know who they are, the BBC, Welby, May, Major, the civil service, and the universities—and those who naive Britons sent to Parliament to represent them. The latter truly deserve the tumbrels. Madame Defarge, where, oh where are you now that we so badly need you? My friend, the talented director and scriptwriter James Toback, grilled me about the British Supreme Court. A very educated man, he was surprised to be unaware of its existence until now. “Don’t take it seriously, Jimmy,” I told him. “It was a con man’s creation that consists of lawyers of murky morality as far as Brexit is concerned.” Jimmy got it right away. The fix was and is on.

“I’d be depressed too if I took American media and its pundits seriously.”

Incidentally, I always suspected men who wear ball huggers, as my son called them, rather than boxer shorts, a gent’s underwear. John Major was revealed to wear the former by his indiscreet and unattractive mistress, and now Charles Moore’s third volume of the greatest British prime minister ever reveals what a snake Major was, and is. Both the U.K. and the U.S. have become battlegrounds over turf. Think about it as an old gangster film plot. The metropolitan elite in the U.K. are the godfathers who want to keep the status quo, the godfathers in the U.S. are trying to get their turf back after a nobody from Queens came in from left field and is top banana. It’s as simple as that. Perhaps a bit more sophisticated, but not really: The whistle-blower against Trump used language like a law professor, including legal references and detailed footnotes. This is a well-thought-out plot to get The Donald. In the U.K. it was done more in the open, but the poisoned dwarf who runs Parliament is in it up to his nonexistent neck.

Trump knew a thing or two when he pledged to drain the swamp. He knew the CIA and the FBI included elements that would be out to get him. When the British spook Christopher Steele compiled the bogus Russian allegations at the behest of the Democrats, the media went wild. Trump was in Putin’s pocket, they screamed. Steele’s bogus findings were called the gold standard of intelligence and Trump was declared dead. Once they were totally debunked…silence. The Russian-collusion hoax is similar to that of the whistle-blower. The fact that the call between Trump and the Ukrainian prime minister did not contain anything remotely sensitive from a national-security perspective means nothing to the media. Actually what this is, is a culture war of the elites against people who support The Donald. It’s a war against those who love their borders, their language, and their culture.

Otherwise everything is hunky-dory. Michael Mailer has been offered a terrific job directing a major film and is off to Louisiana for the duration. He gave a party for me the night before he left and it was a zinger. The next day was the opening of a Roy Cohn HBO documentary in which I appear and am among the few who say kind words about a very controversial character. The irony is that the documentarian, Ivy Meeropol, is the granddaughter of Julius and Ethel Rosenberg, the atomic spies who fried in the electric chair back in 1953 for giving secrets to Uncle Joe Stalin. When we met—she was filming Michael up in the Cape where Norman’s old house is located—he told her I knew Roy well. As luck would have it, Michael was cut out of the picture but Taki stayed. I told Michael it was a Rosenberg plot but they got the wrong man. Life is funny. I remember when Ivy’s grandparents went to the chair. I was down from boarding school to have my tonsils out and could sit at home all day doing nothing. Then the news came in and I was happy because back then I was a ferocious anti-communist. Now I ain’t so sure—about Russia, that is. Communism is still a no-no.