Attack of the Killer Racist Peanuts 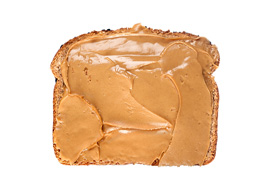 There is no longer a need for satire these days because the world ridicules itself. Modern American culture is a self-parody set on autopilot.

The latest round of nuttiness involves public education and peanut butter. The humble peanut, you see, has become politicized. It is now a “hate food.” The peanut defiantly blocks school entrances, standing in the way of a progressive putsch to enable American schoolchildren to become as physically and culturally hypersensitive as possible.

Two recent news stories”one involving a contraband peanut-butter-and-jelly sandwich at an Arkansas school and the other revolving around a rotund, buffalo-faced Oregon grade-school principal who fingers peanut-butter sandwiches as emblems of “white privilege””illustrate that our public schools are filled to the rafters with nuts who are severely allergic to reality.

In the peanut-sized town of Viola, Arkansas, a teacher confiscated a boy’s PB&J sandwich as if it was a hand grenade and sent a stern letter to the young lad’s parents explaining a school policy designed to protect a micro-minority of students afflicted with peanut allergies. This inflamed the passions of local pro-peanut parents, who launched a “School Nut Ban Discussion” group on Facebook. The kernel of the matter involves whether the “rights” of a tiny minority of peanut-averse children override those of the vast majority of kids who enjoy this high-protein, low-cost staple of the American diet.

“There is no longer a need for satire these days because the world ridicules itself.”

Full disclosure: I grew up gorging on Gaucho peanut-butter cookies,  Fluffernutters, Peanut Butter Kandy Kakes, and my Aunt Berle’s nonpareil peanut-butter fudge. I still enjoy the occasional Southern-styled boiled peanut and nurse a mild-to-intense skepticism about “peanut allergies,” which were unheard-of during my beardless youth.

So when I hear that some children can now die merely from smelling peanuts and that adults are filing race-and-disability-discrimination lawsuits hinging on their skin color and peanut sensitivities, I wax somewhat peanut-defensive.

Children with peanut allergies, whether real or imagined, have become the homosexuals of alternative culinary lifestyles and are said to suffer severe social ostracism and even bullying. If their school isn’t progressive enough to ban peanuts entirely, these hapless youngsters are often segregated in “Nut-Free Zones,” tiny dietary Warsaw Ghettos that highlight their difference and cultural otherness. This cripples their self-esteem, and even though there’s evidence that self-esteem and academic performance may be inversely correlated, the trained seals of modern public education never stop barking about how higher self-esteem is the cornerstone of higher learning.

Although peanut allergies aren’t entirely the nutty figments of soccer moms’ imaginations, a study in England found that four of five kids who thought they suffered from food allergies were merely trained hypochondriacs. There’s been a documented rise in peanut allergies, but the cause remains elusive. Such allergies are virtually nonexistent in Third World countries where kids face constant exposure to dirt and bacteria. One study found that peanut allergies are less prevalent in children who’ve been exposed to peanuts at a young age, suggesting that a fanatically sanitized, overprotective approach to child rearing may contribute to oversensitive kids with underperforming immune systems. So by trying to protect kids from everything, modern parents may actually be making their children more susceptible to everything.