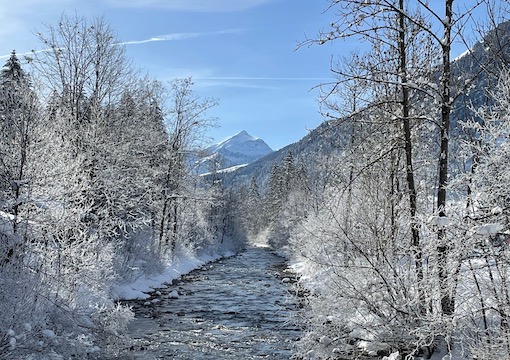 GSTAAD—Imagine a beautiful, sexy woman, an Ava Gardner or a Lily James, with a wart at the end of her nose. It stands out double, whereas on an ugly countenance it would almost go unnoticed. Noise in beautiful and peaceful surroundings disturbs more than in grating, jarring cities. Last week, after yet another record snowfall, on a beautiful sunny afternoon, I was cross-country skiing and stopped for a picnic lunch with Lara and Patricia, two married friends of mine who had left me miles behind while skating, the new method of cross-country. (I remain traditional, gliding on the double track.)

A cloudless and very blue sky accentuated the beauty of the landscape. I haven’t seen so much snow in the 62 winters I’ve spent here, the mountains looking their best, their solemnity inaccessible as there is too much snow for skiers to handle. (And too much risk of avalanches. I’m not one to talk, but had the Alps remained pure and inviolate, instead of being full of brothel resorts, this would be a far, far better place.) Then a bearded 30ish man arrived and took out something from his duffel bag, and suddenly all hell broke loose. Dogs howled, birds took off, sleepy farmers opened windows to find out what the racket was. I had no idea what was going on until Patricia’s young son pointed at the bearded jerk and the machine he was holding while controlling a drone that was making all the noise and scaring away the wildlife.

“Three days of constant, heavy, tropical downpour did to the snow what political correctness has done to American culture.”

In times like this, one needs Aristotelian logic. Old Ari insisted that fine language should be kept for moments where action and argument are not presented. (He was referring to theatrical drama.) Not being Aristotle, and this being real life, I asked the bearded jerk first in French and then in bad German why he was doing this. No response. Finally in English I called him an asshole and he turned, smiled, and said, “Tip-top,” a particularly annoying Swiss expression to signify everything’s hunky-dory. Grounding the drone, he picked it up and disappeared down the valley. Where the hell was the abominable snowman when we needed him?

Mental health professionals and other busybody phonies would have diagnosed my reaction as SPS, small-penis syndrome, or LLS, lockdown logorrhea symptom, but it was nothing of the kind. Most psychotherapists today agree that one-on-one therapy is the answer with people who stand up for themselves at some modern outrage. The richer the patient, the more therapy is advised. Mental health professionals would invent a syndrome for my perfect definition of that jerk as an asshole and strongly advise treatment. I don’t buy any of that. Actually what he did was a form of aural rape, it was almost as bad as interrupting a Schubert sonata with rap crap. Another German, Herr Schopenhauer, said it best: “The higher one’s tolerance for noise, the lower one’s intellect.”

But no use trying to intellectualize what we humans tend to do, and that is telling somebody else what he or she should be doing. The media now have a chokehold on it, but soon Big Tech will have the media by the throat. I just finished Barbara Black’s autobiography, and boy, did the hacks ever do a job on her. (I’ve already dealt with it in a previous column based on excerpts.) Far worse is what certain gossip columnists and writers dealing in falsehood did on Conrad Black. The man is close to genius as far as knowledge is concerned, but he had a great flaw, something no self-respecting hack will ever forgive: He was born rich, and worse, he was a conservative. That’s a no-no nowadays, and as unacceptable as N-wording, women-degrading, gun-praising rappers are acceptable.

Never mind. Envy is a sin but is the strongest of emotions. Somebody up there must have read this before I wrote it—the perfect snow conditions and all that sunshine—looked down at all the less fortunate locked up in their houses and flats, and called for Louis Bromfield’s The Rains Came. Three days of constant, heavy, tropical downpour did to the snow what political correctness has done to American culture. It had to be divine retribution, what with my poor wife locked up alone in London while I frolicked around getting suntanned and healthier by the minute. Mind you, one is thrown in on oneself during a pandemic, and not everyone deals with it positively. Aristotle believed that human curiosity was infinite, and that no subject was unworthy of systematic study. Poor old Ari, he never met an American liberal academic. Or a woke American student, not to mention lefty American and Brit journalists. Aristotle believed that democracy was uniquely Greek since he thought only non-Greeks would accept to live in despotic conditions. This was natural for foreign people, just as self-rule or wise monarchical governments were for the Greeks. The irony today is that Americans keep bragging about their land of the free, yet cannot tell a joke, paint their face, whistle at a pretty girl, or even worship an ancestor without losing their careers and livelihoods. PC tyranny rules supreme; media, Hollywood, Big Tech, and academia follow strict orders; and foolish Americans pretend that they’re free. We Greeks, in the meantime, are freer than ever and are laughing all the way to the beach. This summer, that is.