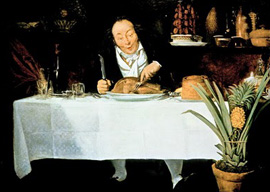 The Gourmand by Louis LÃ©opold Boilly

I just happened to lay my hands on a recent copy of The New York Times“ “Dining & Wine” section that a friend left hanging around. Believe me, I don”t buy the Times. At $2, the copy is no longer good value for starting fires or lining the toucan’s cage.

In typical Times fashion the section had a front-page piece on the culinary taste of one Bobby Seale, 74, former Black Panther chairman, who stood trial for murder and spent two years in the hoosegow for contempt. Guess what”Chairman Seale likes eating “Bobbyque.”

Well, this is the best piece in the section, although there is a lot of Times hand-wringing over dietary guidelines from the federal government, the risks of hypertension, diabetes, and chronic kidney disease arising from a fatty diet. If the Times can”t find a writer who relishes eating, you wonder why they bother with this joyless “Dining & Wine” section. With only four advertisements, it can”t be profitable.

I submit that the word “Dining” is a clue. The only thing worse would be “Fine Dining.” Look out, my friends, when you see these rubriques. Lift your feet, because you are about to be swamped with a mini-tsunami of pretentious bullshit.

“Fucking and eating; how come they didn”t teach this stuff when I was in college?”

Good food writing requires a person with an appetite like the author and glutton Hugh Montgomery-Massingberd. According to The Gossip Family Handbook, he ordered the largest breakfast ever served at London’s Connaught Hotel: porridge, kippers, steak, kidneys, eggs, sausages, bacon, tomatoes, sautÃ©ed potatoes, mushrooms, and fruit salad, all washed down with Buck’s Fizz. He was most famous as the “father of the modern obituary” at The Telegraph. He was also briefly the Spectator‘s restaurant critic, a gig he gave up after a near-fatal heart attack. That’s what you call devotion to one’s craft.

Another author and glutton was A. J. Liebling of The New Yorker. The best boxing writer since Pierce Egan, he described one of Sugar Ray Robinson’s opponents, a pugilist by the name of Georgie Abrams, as “so hairy that when knocked down he looked like a rug.”

Liebling’s Between Meals (1962) is a classic. He writes that appetite is key. Just look at Proust, he says, whose memory was famously tweaked by eating a madeleine, a cookie with so little brandy it “would not furnish a gnat with an alcohol rub.” In light of what Proust wrote with so mild a stimulus, says Liebling, it is the world’s loss that he did not have a heartier appetite: “On a dozen Gardiners Island oysters, a bowl of clam chowder, a peck of steamers, some bay scallops, three sautÃ©ed soft-shelled crabs, a few ears of fresh-picked corn, a thin swordfish steak of generous area, a pair of lobsters, and a Long Island duck, he might have written a masterpiece.”