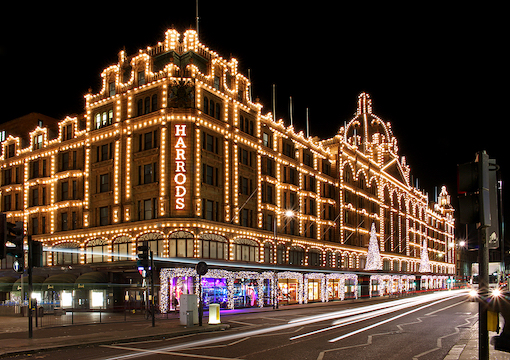 As speaker at a posh dinner given by Jonathan and Jake Goedhuis, the best U.K. wine merchants by far, and attended by many swells including Anthony Mangnall MP, I somehow managed to finish the speech despite having tasted some very good wines beforehand. I nevertheless got lots of mileage from the fact that we Greeks were responsible for inventing the strike—Lysistrata—an act the British unions later on perfected. Ancient Greek women refused to have sex until the men stopped fighting, and the ancient Greek philosopher Taki opined that “F—ing is better than fighting,” thus the first strike ever was successful. Ditto homosexuality, I announced: “We Greeks invented it, you Brits perfected it.”

It’s fun to be back in London if only for the prevailing sense of humor. Had I said something similar in America, lots of bores and prudes would have taken umbrage and walked out. Two days before the greatest speech since that of Marc Anthony, I attended a wonderful lunch chez les Bismarcks, full of young people who promised me lots of addresses of young women but produced absolutely nothing. Sabrina Stoppard—Sir Tom’s bride, whom I hadn’t seen in years—and I reminisced about our respective youths. Hers was healthier than mine. But memory is known to play tricks, and mine ain’t what it used to be. I told Sabrina how I first met the great playwright. I was walking with a pretty girl after a party and looking for a cab. A jalopy stopped and a curly-haired gent asked if we needed a ride. I recognized Tom immediately and accepted. I asked him if he’d like to join us for dinner. “I have to babysit,” said the great man. That was some forty years ago. Continuing my tale to his wife was when I got my plays wrong. I was boxing for a Catholic charity meet when one of the contestants told me he was appearing in Travesties and had to go on before me. This was 1986, but the boxer was appearing in Rosencratz and Guildenstern, an Off Broadway revival, not in Travesties. How do I know for sure? Arki (Lover Boy) Busson was there, and watched me lose a split decision against a semipro. (And Sir Tom can check the year and his bank balance.)

“It’s fun to be back in London if only for the prevailing sense of humor.”

As luck would have it, the next day after the Bismarck lunch there was another one, given by Dave Ker in his St. James’s club. James Marlborough, Bolle Bismarck, Lover Boy, and Charles Churchill’s son were the guests, and our host had strategically placed Arki under the critical eye of the Duke of Wellington, under whose portrait we lunched away. After a couple of bottles of wine I could swear the old Duke was getting angrier and angrier. Arki sat there like a Buddha taking it all in. I have a pretty good idea why the old boy was getting pissed off, but being as discreet as I am, I will keep it to myself. The lunch was gossipy and fun. Dave Ker used to be roly-poly, but in a postprandial pose he showed us his new Charles Atlas figure that had us all feeling rather envious. He claims he lost the weight through nonstop sex. If true, Arki Busson would look like a concentration camp survivor.

Then came the denouement of a great week with the Troubadour concert of the first duke of Bunter but 12th duke of Beaufort. I arrived under the weather and my worried driver was hesitant to drop me until Johnson Somerset, the star attraction’s brother, escorted me inside. Harry Beaufort is the Joe Cocker of the upper classes, and while the girls swooned, I even had a quick history lesson with his historian sister Anne. And now I want to touch upon something that I find truly shocking, what took place at Harrods with the aforementioned Lord John Somerset.

I have known him forever, as they say, and I am godfather to his daughter Romi, and have never throughout the years ever seen him misbehave in the slightest. Last week, while shopping at Harrods and dressed in jeans and a light-colored jacket, he was waiting to pay for a 500-pound speaker—he works in music—when he was approached by two store heavies and almost frog-marched down five floors and out of the store. When he demanded to know the reason for this outrage, he was told that he was inappropriately dressed for Harrods. This in a store filled with horrors in shorts and others whose description might be interpreted as racist on my part.

What I suspect is that the two bullies were showing off and picked on an easy target, an English gent who was not about to put up a fight. What I find incredible is that an English lord is targeted and publicly embarrassed for absolutely no reason except that he’s white, a gentleman, and someone not about to raise a fuss. If that’s not reverse racism I don’t know what is. My advice to Johnson was to hire a shark lawyer and sue the hell out of Harrods. He declined because people like him don’t sue. But the place better apologize and be quick about it. In the meantime, all of you white Brits out there better be careful. London is becoming like the Bagel, a haven for the wrong types.