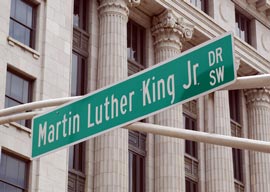 In 1994, a black man told an audience at New Jersey’s Kean College, “White folks was in the caves while we was building empires…. We taught philosophy and astrology and mathematics before Socrates and them Greek homos ever got around to it…. Do some cracker come and tell you, “Well, my mother and father blood go back to the Mayflower,” you better hold your pocket. That ain”t nothing to be proud of, that means their forefathers was crooks.”

Also in 1994, a national debate raged over the light sentences handed down to a group of black men who, driven by racial hatred, had beaten a white truck driver named Reginald Denny nearly to death on live TV.

And so it went for the next 21 years, at the end of which the man who spoke those words at Kean College, Al Sharpton, is a trusted adviser to our president and a frequent guest at the White House, Dylan Roof sits in a jail cell charged with the cold-blooded murders of nine black people in a Charleston, S.C., church, and an exhausted nation is convulsed, yet again, by the interminable issue of race.

“An exhausted nation is convulsed, yet again, by the interminable issue of race.”

So here is Dylan Roof, a white kid living in the nation’s fifth blackest state. He is a high school dropout who has heard the term “white privilege” a thousand times but doesn’t feel privileged in the least. He has noticed, as we all have, that when a victim is black, the headline mentions his or her race, but when a victim is white, it doesn’t. He has seen the national statistic that around three percent of black males are imprisoned at any given time, compared with a half percent of white males. He has heard that statistic cited as evidence that there is something unjust about his culture rather than as evidence of the greater criminality of blacks.

Back during the Trayvon Martin spectacle, a smart, confused, poorly educated white boy Googled “black on white crime.” And was floored. It seemed blacks murder whites way more than whites murder blacks”way, way more”yet here was this statistical anomaly in Florida receiving wall-to-wall media coverage and blacks and whites protesting and wearing hoodies and buying Skittles while the white murder victims went to their graves unnoticed and NBC was caught doctoring the 911 recording to make it appear Trayvon Martin was killed by a racist white guy because he was black.

What the hell, Dylan Roof wonders?

Then a young black guy in Ferguson, Mo., is shot and killed by a white police officer after lunging at the officer, and riots engulf Ferguson and Greater St. Louis. The New York Times declares riots are “clearly” the fault of the “local white power structure” and cites Missouri DMV data showing blacks are stopped for traffic violations at a higher rate than whites in Ferguson, and that explains the “fury” in the streets of Ferguson. But the very same data that showed that blacks are stopped by cops at a higher rate showed that whites are stopped at a higher rate than Hispanics, Asians, Native Americans, and Others. But the Times can’t demonize “local” whites if that part of the data is included, so the Times simply leaves it out.

What the hell, Dylan Roof wonders?

Then he is 21 and has come to believe that the black race is taking down his race. This makes him angry. He walks into a prayer meeting and joins a small group of black people studying the Bible. Then, transferring himself from the angry-young-man column to the depraved-monster column, he slaughters nine of them in cold blood.