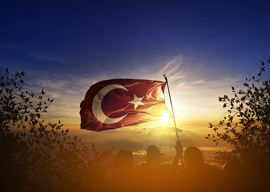 The recent events in Turkey interested me in part because I am about to pay my annual visit to that country. I always go to the same place, in which, though it is very Westernized, I have noticed over the years that the muezzins”or rather, the recordings of muezzins”have grown louder, and their recitations longer, than in preceding years. There has also been a war of flags: between those of the Turkish flag, plain and simple, and those of the Turkish flag with the picture of Kemal Ataturk superimposed on it. The latter, of course, is the banner of those, here greatly in the majority, who are opposed to, and fear, the replacement of the Kemalist state by an Islamic one.

Friends asked me whether, in view of the troubles, I still intended to go. They offered two reasons why I might not: terrorism and political disapproval.

As for political disapproval, I am not much one for grand gestures such as refusal to go to a country because I reprehend its leaders. This would not only leave me with very few places actually to go, but I am rather skeptical about the practical effects that my absence from a country would actually have by comparison with my presence. Besides, I have, within limits, generally found that people with bad governments are more agreeable than those with (relatively) good ones. Moreover, my most memorable trips, the ones that have had the profoundest effect on me, were always to the worst places in the world. Worst at the time, that is”rankings can change with surprising speed. And in any case Turkey is very far from being the worst. My only regret about my forthcoming trip is that I booked it before the coup attempt: Prices have fallen markedly since, with people deciding to go somewhere else.

“My most memorable trips, the ones that have had the profoundest effect on me, were always to the worst places in the world.”

The episode should have reminded us that democracy and freedom are not the same things at all. Mr. Erdogan is undoubtedly a legitimate democratic leader voted into office by more votes than his opponents received in elections that were properly conducted. Yet the depth of his commitment to parliamentary-type democracy may be somewhat in doubt; he once famously, or infamously, described democracy as a train from which you alighted once you had reached your desired destination. But for the moment he is right when he says that the attempt to overthrow him was against all democratic procedure.

He has complained loudly and vociferously that the Europeans and Americans have not supported him as they might, or as much as, in his opinion, he thinks they should. He accuses them of hypocrisy and betrayal of their own supposed values: If they really valued democracy, they would have rushed to his defense. Of course, he who looks for consistency among politicians is bound to be disappointed; but if inconsistency in political life is inevitable, so is complaint about inconsistency.

The reticence of Europe and America with regard to Mr. Erdogan is surely due in part to an apprehension that, while he is indeed a democratically elected leader, he is not therefore a friend of freedom. Turkey has never been much of a bastion of free expression, and Mr. Erdogan is no enthusiast for vigorous or uninhibited criticism either of himself or the religion that he believes is the answer to man’s woes. The American founding fathers were perfectly aware that the will of the majority could be tyrannical, as were Tocqueville and John Stuart Mill, and as Mr. Erdogan is not (or he doesn”t care). Many people, perhaps most, object to massacre because they think the wrong people are massacred, and not to massacre as a genre of human conduct. In like fashion, they claim the freedom to express their own opinions but not that of others to express theirs. “I disagree with what you say and defend to the death my right to suppress it” is a much better summary of most human sentiment than “I disagree with what you say but defend to the death your right to say it.”

Mr. Erdogan is right, however, when he accuses the European Union of insincerity in their negotiations with Turkey. The Europeans cannot make up their mind which is more important to them: their desire to expand their empire and bring Turkey into their orbit, or their fear of a still-Muslim country that would be the largest both in landmass and demographically in Europe. What they would really like is to bring the secular, Westernized, and largely western part of the population into Europe while leaving the ignorant Muslim peasantry where it is. But this is not possible, hence the endless negotiations that never seem to lead anywhere.

The Turkish president’s threat to reintroduce the death penalty, abolished de facto in Turkey in 1984 and de jure twenty years later, therefore comes as a godsend to the Europeans, a perfect pretext on which to end the negotiations on an apparent matter of principle. We in Europe can put up with anything except the death penalty.