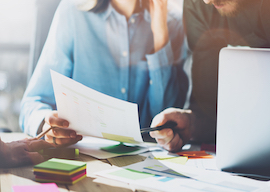 My bank is large and I am small: Perhaps that is why it feels entitled to write to me so impertinently. I received a letter from it the other day with the heading “Some of your account information needs updating.”

My account information does not need anything; it is not the kind of entity that has needs. “It’s very important that all of the information we have about your business is up to date.” To whom is it important? Not to me, it isn’t. All I want is that the bank should operate an account on my behalf into which I can pay money in and out.

“This is to help us stop financial crime.” By that it presumably means financial crime not committed by itself, since earlier this year it was fined $2,000,000,000 for wrongdoing, only one of a succession of many such fines. (Of course, I also have my doubts about the probity of the authorities that levy the fines, which are a convenient way for governments to raise revenue without resorting to taxation.) I find it rather difficult, however, to imagine a financial criminal who was likely to be caught or even deterred as a result of filling in the form sent with the letter.

“What you need to do,” says the letter, addressing me in the tone of Richard III refusing the Duke of Buckingham’s request. “Complete the form…along with your supporting documentation…. You’ll need to complete ALL sections of the form and sign the ‘Declaration and signature’ section. We’ll be in touch if there’s anything else you need to do.” Finally, just to introduce a nice little touch of cognitive dissonance, “We’re here to help.”

It appears that, unbeknown to me, I was a very needy person. It so happens that on the day that I received the form from the bank—fillable online, of course—I received a form from my local council. “This form is not a registration form but you do need to complete it.” This would enable the council to know the persons in my house who were eligible to vote and “need to register.”

“‘You need to…’: That was the phrase that irritated me so profoundly.”

It seems that neither large corporations nor government agencies are able to make the distinction between “you need to” and “we require you to.” In the case of the council, at least, the menace was explicit: If I failed to fill the form, I could be fined £1,000. In the case of the bank, there was no explicit punishment for failure to fill its form, but on the other hand there was no real benefit offered, either, unlike the council form that told me that “Your vote matters,” and therefore “Don’t lose it.”

“You need to…”: That was the phrase that irritated me so profoundly. I need to get up in the morning, granted, and I need to put my socks on, I even need my cup of coffee, but I do not need to fill in forms. If the respective bullying organizations had only said, “We require you to…” I should not have gotten so worked up. It would have been a frank avowal of their power over me and not at all the mealymouthed pretense that it was for my own good, that some kind of benefit was being conferred by my needs having been met in complying with their demands.

I felt a little—though only a little—like Josef K. in Kafka’s The Trial:

Someone must have been telling lies about Josef K. because, although he knew that he had done nothing wrong, he was arrested one morning.

It was my birthday the next day and I received birthday wishes, mostly from organizations with which my relations are purely economic, Google among them. The space in which you type the object of your search was festooned with candles as on a birthday cake, and instead of the politically correct anniversary that is often commemorated, it wished me happy birthday. I caught myself thinking very briefly, “How kind!” until I pulled myself together and accepted that kindness had nothing to do with it, any more than a recorded message that your call is very important to us while you wait twenty minutes for a reply represents any personal solicitude for you on the part of the company that you are calling. On the contrary, what it means is that we (the company) have no intention of paying enough telephonists, thus reducing our profits, just to answer your footling inquiries.

Yesterday, for reasons too elaborate to go into, I tried to contact a government department that offers grants to organizations that want to pursue certain projects and seek subsidies. Irrespective of the effects of subsidies in general, I knew of an organization that was seeking a subsidy for something that I considered deleterious to the town in which I lived and wanted to make objection to it.

I found the website of the government department that hands out the subsidies, but there was no means of communicating with it except by applying to it for a grant. It had no address, postal or e-mail, and no telephone number. Although it was only a department, the website did not say what it was a department of.

In other words, it handed out grants to applicants, but only at its own discretion. Its power was (in its own small corner of the world) absolute. It gave no clue as to the criteria it used in choosing the applicants to subsidize; the public had no say in its deliberations. The public’s only relationship with it was to pay its taxes, from which the subsidies it granted were drawn. The impression given was of a bureaucratic Peronism—Eva-Peronism, that is. (In my childhood, the name of Eva Perón meant only those Argentinean stamps that bore her picture, and I thought her the most beautiful woman in the world.)

For a few moments I was furious, but then dinner called, I went out with a friend, and equanimity returned. The nibbling away of our freedom is possible because of our ability—by no means entirely to be despised—to retreat into a world of private pleasure.