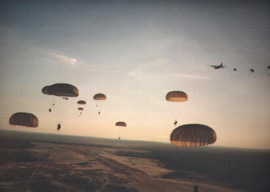 OK, so I did vote after all, my lofty apathy indifference of three weeks ago notwithstanding. It was my son that sent me off to the polling booth.

Danny Derbyshire has for years had his heart set on joining the Army. A high-school senior, he encountered a recruiter back in September, and the recruiter reeled him in without much difficulty. I”ve warned the lad that when the wooing stops and he’s just another grunt in uniform, there”ll be some psychological letdown, but he declares himself unbothered.

Danny took the AFQT (basically an IQ test: the cutoff for the Army is IQ 92) and the ASVAB (a vocational test to see which military specialty suits you). A smart kid”it’s genetic“Danny aced both tests and is in A-1 physical condition, so they basically told him he could pick his own specialty. He picked Airborne Rangers, the most dangerous specialty on the list. They jump out of planes to do Navy-SEAL-type super-hazardous missions.

“It was all for naught. As I write, shortly after midnight on Wednesday morning, it is clear that Barack Obama has won another term.”

I was thrilled. Mrs. D., however, had a conniption. The traditional prejudice of the Chinese is that “å¥½éµä¸æé, å¥½åä¸ç¶åµ”””You don”t use good iron to make nails, a good son does not become a soldier.” My wife had just recently overcome this ancestral wisdom and reconciled herself to the lad having a military career, but she had taken comfort in the thought that he would enter some safe specialty”military intelligence, perhaps, sitting at a PC screen in a cube deciphering information from the field. That her son might actually be the field was too much for her.

We talked Mom most of the way down from her ledge, but she was still adamant that if Danny got killed on active service, she would divorce me. I consigned to that, Danny went off for an overnight stay at Fort Hamilton (more physicals, some kind of a preliminary oath), and he can now proceed straight from high-school graduation next summer to Fort Benning for boot camp. From there he goes to Ranger school, which has a sensational washout rate.

I am reliably informed by a Texas friend”in Texas everybody has a family member in the military”that Ranger school washouts get all the crap jobs in the Army. I passed this on to my son, but he was unfazed. “I”ll qualify.” As temperamentally hostile as I am to every form of facile optimism, I admired my son’s resolution.

(The only other conservative I know with a son in the military is Peter Brimelow of VDARE.com, whose son Alexander is currently serving with the US Marine Corps in Afghanistan. On the basis of this admittedly tiny sample, I”d suggest that if you want to meet a conservative with a military-minded kid, go to the dissident right. Bigfoot mainstream-conservative pundits send their kids to law school.)