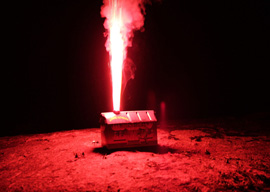 I blame the Burning Schoolhouse.

Canadians are perversely proud that our most popular backyard firework is unavailable in the United States. More like a science-fair volcano than a proper pyrotechnic, the homely Burning Schoolhouse merely spews a two-foot flame that lasts half a minute if you’re lucky.

But every May Two-Four for generations, Canadian kids have cherished those measly 30 sacred seconds, indulging in socially sanctioned fantasies of third-degree carnage.

You won’t hear this from Michael Moore, but modern school shootings are a Canadian invention, too, and I don’t just mean 1989’s “Montreal Massacre.” Despite the absence of a so-called “gun culture,” we spawned the first Adam Lanzas back in the mid-1970s, getting a twenty-plus-year head start on Columbine.

“It’s obvious that the way to end school shootings is to forget about the ‘shootings’ part and focus on the first word instead.”

Don’t be fooled by those low body counts circa 1975. Look at the number of wounded, too. In both instances”unlike most American school shootings in the 1970s“those Canucks were would-be spree killers, targeting more than just a hated teacher or classmate.

I’m only kidding about blaming a tacky once-a-year firecracker display, but in the wake of Sandy Hook, would-be reformers are deadly serious. From the gun grabbers to those who want to lock up loonies, they’re all foolishly looking for a solution through the wrong end of the telescope.

It’s obvious that the way to end school shootings is to forget about the “shootings” part and focus on the first word instead.

We need to abolish schools.

A survey of popular culture indicates that attitudes about compulsory public education have drastically devolved. Children have always hated school, but the Our Gang kids only “played hooky” from class, they didn’t shoot it up. The “juvies” in Blackboard Jungle (1955) just smash up some classical-music records and manhandle a teacher (who probably liked it).

The sea change dates back to”you’ll never guess”1968, when Lindsay Anderson’s film …if climaxed with an armed student rebellion at an English public school.

No, I’m not blaming pop culture, either. Movies and music reflect the zeitgeist as much as they influence it; attempting to guess exactly when they do which is as easy as guessing which wire to snip when defusing a bomb.

Some trace our troubles to the outlawing of school prayer. I’ll grant those well-meaning folks points for getting their dates right, since those Supreme Court decisions came down in 1963 and 1964.

But prayer wasn’t the only thing swept aside, as Latin-literate older readers don’t need me to tell them.