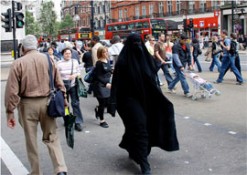 From Pakistan to Turkey, from the Mediterranean to the Gulf, the insidious and colonising march of the burqa or niqab full face-and-body veil continues. Everywhere, anonymous and intimidating figures supposedly human, apparently female—can be sighted remote and shrouded from the very societies they inhabit.

Call me illiberal and prescriptive, dub me anything you like—the burqa should neither be accepted nor acceptable in modern Britain or any other western democratic state. So choke on your pc-orthodoxy and wise up. And knickers to the nijab.

In the feeble and stupid manner beloved and adopted by all recent British governments, ministers have described the wearing of the burqa by Muslim women as some kind of litmus test of our “tolerance and mutual respect.” This is patently horseshit.

There is precious little tolerance—and quite some degree of prejudice—in veiling oneself against the ways and customs of an open-faced democracy; there is precious little respect—and a fair deal of contempt—in enjoying the privilege and freedoms of life in Britain while resolutely refusing to participate in its daily norms. You cannot interact if you are hidden. You cannot give or engage if you cannot smile, laugh, frown or grimace. You cannot demand equality if you deliberately set yourself apart. Think about it.

“The burqa is concerned with protecting women, elevating their status, honoring and preserving their dignity, its proponents would argue. Stop right there.”

We need integration and not segregation, cohesion rather than Balkanisation. If a nation is to both thrive and survive, it requires a core identity and a common value system. Without these, we are doomed to fracture into nothing more than a loose and uncomfortable conglomeration of exclusive and competing cultural fiefdoms that do not mix or communicate or contribute or share. That way lies misunderstanding; that way lies extremism; that way lies tension, suspicion, disintegration and national suicide. And that way lies the next generation of young jihadists, who will grow up behind their own metaphorical veil believing they can operate alienated and isolated from the whole.

A right and a cultural icon, a long-standing tradition, some might argue. Forgive me, but so were the scold’s bridle, the ducking-stoll and the hunting and burning at the stake of suspected witches. Longevity alone does not make it acceptable. It is an import—and an unwelcome one—along with forced marriages, honour killings, asian-sourced corruption, sharia and radical imams preaching anti-western hate. For some bizarre reason, be it fear or asininity, we tiptoe mute around any issue regarding Islam. It shows utter lack of confidence and a dangerous lack of leadership. The burqa is an extremist statement. Kill it.

Notionally secular—but with our roots, laws and governance set deep in the Christian tradition—it seems absurd that a person would be ejected from a store, bar or bus for wearing a balaclava but not a burqa. Already we have incidents in which Muslims have thrown passengers off public transport for the sole reason they are accompanied by “unclean” dogs (even guide-dogs for the blind). We cannot afford to lose this battle, cannot afford to submit.

The face is the outward expression of our humanity, an indicator of who we are and the kind of society we have chosen to build. So, naturally, a woman wearing a burqa is going to arouse nervousness and hostility. How can there be equality when that same woman does not greet or meet us as an equal? How can there be understanding if the burqa-clad apparition so dismally fails to understand us? How can there be harmony, warmth, humour, bonding or a gentle passing of the time-of-day in this soulless and faceless milieu? Democracy relies on give-and-take, is about interaction and compromise. The burqa is all about take.

Ridiculously judgmental and naÃ¯ve of me, I know. The burqa is concerned with protecting women, elevating their status, honoring and preserving their dignity, its proponents would argue. Stop right there. Much the same line was peddled as the reason for denying women either education or the vote, is still employed to deny women a defense lawyer in many Muslim states. The burqa is—whatever the gloss and cultural claptrap—ritualized oppression designed to keep females in their place. Subjugation can be comforting if you know no different and the community around you insists. It will not do.

Numerous Muslim women—especially western converts—will sit veiled in total anonymity and vehemently defend this dark age practice. It is nothing less than masochistic chic. There is ever a queue of crazed and melancholic types offering to marry jailed murderers or sending love-letters to serial rapists. There are too tens of thousands of battered women who will never walk from their abusive husbands and will proclaim undying loyalty. The burqa is that abusive husband and that jailed murderer. It provides the benchmark and creates a secrecy behind which all manner of ills prevail. Transparency—and not the veil—is the key to civilization.

Talk to any British doctor who tends to the medical needs of highly conservative Muslim communities. Without exception, they will testify to the dreadful health problems—including depression, obesity, diabetes and heart conditions—brought on by the burqa and its concomitants of Vitamin D deficiency and lack of fitness, confidence and self-esteem. Oh, and I forgot to mention respiratory trouble caused by constantly breathing recycled air. 2010 and politicians continue to drivel on about multiculturalism and mutual respect.

A British Tory MP who politely requests visiting Muslim women to lift their veils before he will meet them has now been informed he might face legal sanction. Nothing quite like human rights legislation to suppress common sense. Perhaps he should simply greet his burqa-garbed guests with a bucket, cardboard box, superhero disguise or paper bag covering his features, just to prove that English eccentricity trumps ethnic medievalism every time. Of course, those very visitors would doubtless fail to see the joke or appreciate that they themselves were being rude and discourteous.

This is Britain. It is not an Arab souk or a refuge for foreigners keen to impose their belief-systems and intolerance on the rest. Our freedoms were hard fought-for and won with blood and they are being eroded through sleight of hand and misguided notions of duty-less rights and anything goes. The burqa is being banned across Europe for a reason—watch the hooded crows flock in mass formations to our open shores.

The burqa is more than mere statement, more strident and divisive than a discreet crucifix about the neck, a yarmulke, a headscarf or an Amish hat. It is the apparel and manifestation of intolerance, an emblem of a fundamentalist creed that seeks to cover the face while baring its ass to the free world around.

Our response should be as clear as the obvious moral. If you wish to be treated as a human being—first endeavor to look like one.