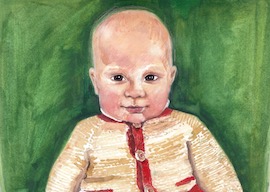 They were putting the finishing touches on the giant tent as I drove up to the Schloss Wolfsegg after an hour’s plane ride from Gstaad to a tiny nearby airport. With me were my son and two good friends, and the Pilatus felt like a Messerschmitt 109 cutting through the clouds and landing on a dime. Pilatus is a great airplane. It can cruise for seven hours at 280 knots, and land at less than 500 meters. It seats six people very comfortably. The only man who has complained about this aircraft is my old friend Charlie Glass, who, like a true lefty, whined about the lavatory’s headroom. (I told him to try easyJet next time, but lefties like to fly private and not mix with hoi polloi.)

The house party at the castle consisted of about 75 people, and the occasion was the “Heilige Taufe”—the Holy Baptism—of Antonius Alexandros Edouard Maria, my grandson. Before I go on, a word about how good it feels to be far away from the vulgarities of today’s politically correct world. Civilization matters a hell of a lot, and one is reminded of it in places like the Austrian woods and my son-in-law’s schloss. Here we are, after nearly 1,500 years of achievement in philosophy, poetry, architecture, science, music, art, and religion, yet we allow cultural troglodytes and other such “cool” types to set the agenda. Western civilization was basically the creation of the Church. It was believers like Charles Martel in 732 and Duke John in Lepanto in 1571 and Jan Sobieski in 1683 who defeated the invading Muslim hordes and safeguarded the Christian continent. Western civilization was erected on a Christian foundation, and chivalric respect for women grew from the devotion to Mary in the Church. The art that followed was an expression of that faith.

Mind you, the spiritual emptiness of the modern world was absent for the weekend at Schloss Wolfsegg. Friday night’s dinner was at a wonderful nearby inn with traditional Austrian food and lotsa wine. Too much, in fact, and early Saturday morning, in the beautiful tiny church within the castle, the grandfather was feeling his age. “Panis Angelicus,” the hymn by César Franck, woke me up and inspired me to listen closely to what Monsignor Herman Pachinger and the perfectly named Dr. Markus Himmelbauer had to say. Heaven should be right here on earth, said the good priest, live a good Christian life and you don’t have to worry about what happens afterwards. I looked around me and saw only tall blond men and women, old and young, all listening to the message while my little grandson, dressed up in his great-grandmother’s silk white baby dress, looked happy and rather curious at the goings-on. No one promised virgins in the afterlife and no one encouraged anyone to go out and kill people. It made for a change.

“The spiritual emptiness of the modern world was absent for the weekend at Schloss Wolfsegg.”

A great lunch followed in the tent—a very liquid one, I might add. I sat between Fiona, a beautiful young blonde, and my friend Ludmila Habsburg, a grande dame whose political opinions and mine are geometrically opposed. We talked only politics and laughed a hell of a lot and not a single bitter word was exchanged. It was similar to arguing with a young Corbynista about climate change. (And if you believe that, you probably think Philip Green is an aristocrat.) Then came my Waterloo.

At the dinner that evening, my son-in-law’s best friend, Prince Altenburg, gave a very funny speech, although quite gone, if you know what I mean. This encouraged me to do the same after some people called for me to speak. I could see the mother of my children, who recognizes the symptoms, squirming. But speak I did and made the most disastrous after-dinner speech ever. People were kind but it was embarrassing, as only drunken speeches can be. The only relief was more oblivion, but I made up for it the next day by announcing during lunch that Alexandra and I were expecting a happy event, finally drawing a laugh.

Well, because of the surroundings and the people present I was transported back to a time of a more civilized era. I was brought back to the present when Prince Altenburg’s little baby boy, born five days apart from my grandson, was brought in and placed next to little Antonius. The babies looked like blond, blue-eyed twins. But my grandson took exception to the new addition in his crib and screamed like those horror females do against Boris, or Trump, or whatever. Territorial imperative, I presume, it starts early on. They will one day be the best of friends like their fathers, is my guess. I then piled everybody in the Pilatus and flew back to Gstaad, only to come down with the hidden virus I had drowned for three days, the one I carried over from the Bagel.

In last week’s column, I mentioned Carlo di Robilant, the father of my friend Edmondo, in a not very nice way. I regret this because I got it wrong. The Robilants have never been Fascists at any time, before, during, or after Mussolini. Perhaps because my father and grandfather were supporters of the Greek dictator Metaxas—as I still am—I did not see it as an insult, to be a Fascist, that is. I like Edmondo and Maya di Robilant and did not wish to hurt their feelings, especially as the family was anti-Duce. Viva Il Duce.