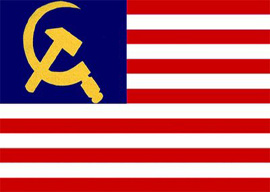 As a large and furious demonstration was under way outside and inside the Capitol in Madison last week, Barack Obama invited in a TV camera crew from Milwaukee and proceeded to fan the flames.

Dropping the mask of The Great Compromiser, Obama reverted to his role as South Chicago community organizer, charging Gov. Scott Walker and the Wisconsin legislature with an “assault on unions.”

As the late Saul Alinsky admonished in his “Rules for Radicals,” “the community organizer … must first rub raw the resentments of the people; fan the latent hostilities to the point of overt expression.”

After Obama goaded the demonstrators, the protests swelled. All 14 Democratic state senators fled to Illinois to paralyze the upper chamber by denying it a quorum. Teachers went on strike, left kids in the classroom and came to Madison. Schools shut down.

Jesse Jackson arrived. The White House political machine went into overdrive to sustain the crowds in Madison and other capitals and use street pressure to break governments seeking to peel back the pay, perks, privileges and power of public employee unions that are the taxpayer-subsidized armies of the Democratic Party.

Marin County millionairess Nancy Pelosi, doing a poor imitation of Emma Goldman, announced, “I stand in solidarity with the Wisconsin workers fighting for their rights, especially for all the students and young people leading the charge.”

Some carried signs comparing Walker to Hitler, Mussolini and Mubarak. One had a placard with the face of Walker in the cross hairs of a rifle sight. Major media seemed uninterested. These signs didn’t comport with their script.

In related street action, protesters, outraged over Congress’ oversight of the D.C. budget, showed up at John Boehner’s residence on Capitol Hill to abuse the speaker at his home.

And so the great battle of this generation is engaged.

“In short, does democracy work anymore in America?”

Between now and 2013, the states are facing a total budget shortfall of $175 billion. To solve it, they are taking separate paths.

Illinois voted to raise taxes by two-thirds and borrow $12 billion more, $8.5 billion of it to pay overdue bills. The Republican minority fought this approach, but was outvoted and accepted defeat.

Wisconsin, however, where Republicans captured both houses and the governor’s office in November, and which is facing a deficit of $3.6 billion over the next two years, has chosen to cut spending.

Walker and the legislature want to require state employees, except police, firemen and troopers, to contribute half of their future pension benefits and up to 12.6 percent of health care premiums.